Genshin Impact, developed by miYoHo, is an open-world action RPG that uses a gacha system to unlock things in the game world; this could be new characters or new equipment! Because of its gacha mechanic, there are many different currencies to use in the game, but not all of them impact the gacha system. Multiple other currencies can be used to purchase items to ascend your characters but cannot be used to summon a new character.

There are many different currency in the Genshin Impact, these include Mora, Primogem, Fates, Genesis Crystal, Stardust, Starglitter, Anemo Sigil, and Geo Sigils. Each of these usually have a specific purpose, but some have uses that are overlapped, mostly in the way you can purchase wishes that will allow you to get new items and characters.

Every game needs money, that's a given! In Genshin Impact, the equivalent of money is called the Mora, which is more or less needed for everything you do. It's not only used for buying products in shops, but it's also needed to level up your characters, enhancing equipment plus plenty more. As I said, mostly, everything you do needs Mora, so make sure it never runs out! This currency is pretty frequently given out for completing quests, slaying enemies, and anything else you do in the game.

Primogem is vitally important and is also the second type of currency; you'll most likely have a lot of it just by playing the game. The main function of Primogems is to trade them for another type of currency; the premium currency used to make Wishes, Fates. If you are after a way to farm Primogems, we've got you covered! 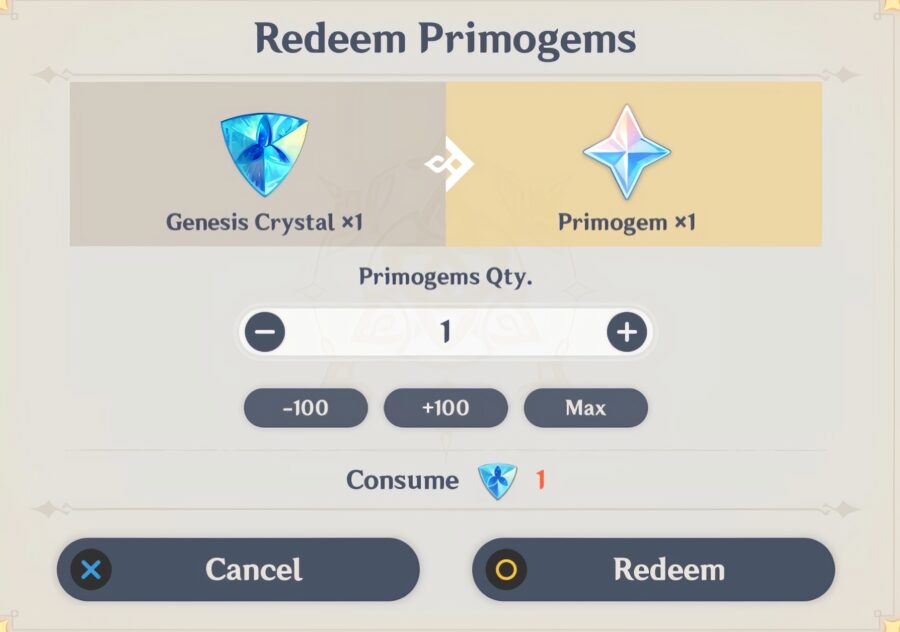 Stardust is acquired by making wishes; the more you make, the more likely you are to acquire it, so using the bundle of 10 is always the best, as you get better odds that way anyway! This is a 4 Star currency, so you'll earn it a lot more than you would Stardust. Because you earn so much of it, the shop has limited the amount of Fate currency you can buy; this means you can only buy 5 of each until the store refreshes every couple of days. At the moment, you can trade for Fates using 75 Stardust instead of 125 because there is a 40% discount!

Fate's are not the only thing that can be purchased using Stardust; you can acquire an assortment of items that would normally drop from enemies all over the world. Buying them from Paimon's Bargain Shop allows you to get them quicker! 3 Star rarity and below are what can be purchased using Stardust, apart from Fate's, which are a 5 Star item. However, some of the shop is locked a certain Adventure Rank, which is Rank 25.

Starglitter is earned by making wishes; the more you wish for, the more you earn. So the bundle of 10 will net you more of this currency then only using a single wish. However, this is a 5 Star currency, meaning it's quite rare and valuable, so you'll get less of this than Stardust. Like Primogems, this currency is used for trading for Fate currency, and every 5 Starglitter you have can be changed for a Fate, and there is no limit to how many you can buy.

Like Stardust, Starglitter is not only used to buy Fates. As Starglitter is a higher form of currency, the things you can buy using it far exceeds that of Stardust. Using Starglitter, the shop offers only 4 Star items, so this means Characters can be purchased, but over a limited time, so the characters available will no doubt rotate at random. Weapons and other items can also be purchased, but over half of the shop is limited to having an Adventure Rank of 35.

These Anemo Sigils cannot aren't used for anything to do with making wishes; instead, you can exchange them for various items in the Mondstadt's Souvenir Shop. There are two ways to earn this sigil, the first is by increasing the Mondstadt Statue of the Seven rank, and the second is by opening chests in Mondstadt.

The sigils are valuable because the souvenir shop has a lot of character ascension upgrades, which normally you would have to grind bosses for the hope of getting one of these items as loot. Exchanging Anemo Sigils for these items is the fastest way to acquire them.

The Geo Sigils, like the Anemo Sigils, cannot be used with anything to do with making wishes; instead, you can exchange them for various items in the Liyue Souvenir Shop. There are two ways to earn this sigil, the first by increasing the Liyue Statue of the Seven rank, and the second by opening chests in the Liyue region.

Like the Anemo Sigil, there is a souvenir shop with character upgrades, too, so you can purchase these twice as fast if you use both shops to do so, as there are many characters to ascend!