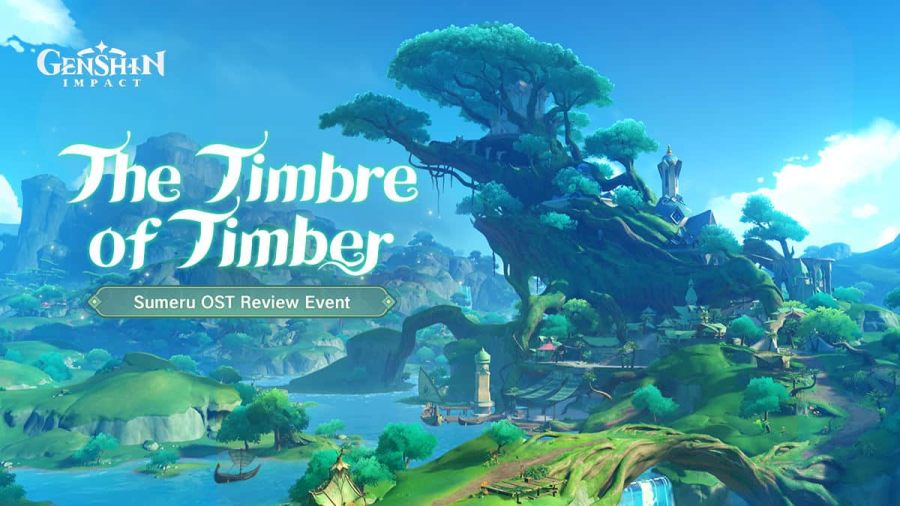 The Timbre of Timber: Sumeru OST Review is a Genshin Impact HoYoLAB event that runs from October 21, 2022, to November 3, 2022. By participating, you're guaranteed a HoYoLAB participation prize, and a chance to win up to 3,000 Primogems. It only takes a second to join, so don't miss out!

Head to the official event page on HoYoLAB via browser or the app, which can be downloaded through the App Store and Google Play Store. HoYoLAB is a community platform for all HoYoverse games, including Tears of Themis, Genshin Impact, Honkai Impact 3rd, Honkai: Star Rail, and Zenless Zone Zero. To log in, input your Genshin Impact account information, which doubles up as your HoYoverse account.

Next, watch the Forest of Jnana and Vidya OST on Genshin Impact's official YouTube channel. This album contains the tunes you've heard while traveling around Sumeru's lush rainforests. Once that's done, head to the comment section of the event page and post a comment with your thoughts, review, and appreciation of the OST. You must post your own comment, and not a response to an existing one.

Related: Where to find all Future Stars in the Genshin Impact Star-Seeker’s Sojourn event

There are four prize tiers:

Everyone who participates will receive the Avatar Frame prize, which is a cosmetic feature exclusive HoYoLAB. HoYoverse did not disclose the selection method for the first three prizes, but it's likely to be a raffle based on previous events that they held on the same platform.

HoYoverse will announce the list of winners on the official event page around November 17, 2022, so make sure to stay tuned to know whether you've won any of the prizes. Additionally, pay attention to your HoYoLAB notifications (System and Reward) as you may need to submit your in-game information for the developer to send over the prizes. Failure to provide HoYoverse with your information within the time limit will result in forfeiture.

Don't forger to enjoy the Forest of Jnana and Vidya Promotional MV on Genshin Impact's official YouTube channel below.