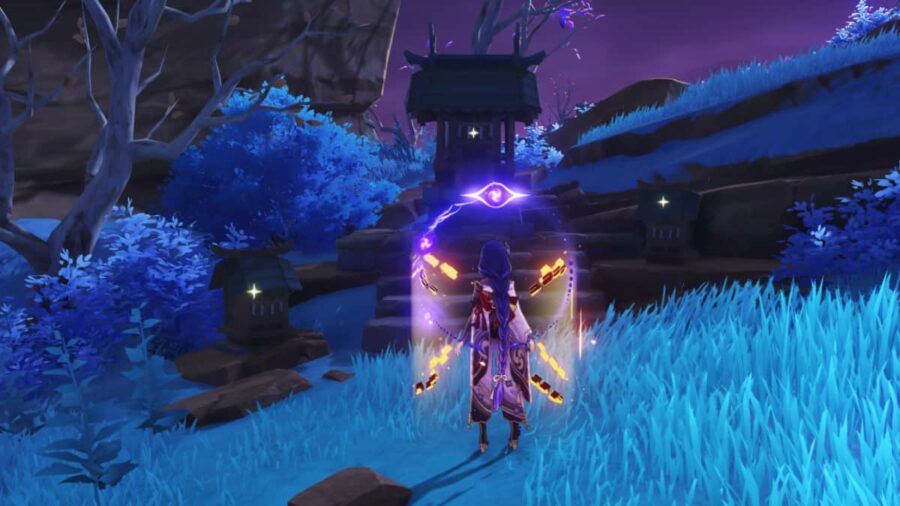 When Seirai Island became unhabitable during the events years past, the Shogunate evacuated its inhabitants to Narukami Island. Since then, many have tried to reclaim their memories of the former—one of whom you can lend a hand to in the Reminiscence of Seirai World Quest.

This Word Quest isn't automatically found in the Quest menu. Activate it by heading west of Fort Hiraumi in the exact location marked up in the image below.

There, you'll find a shrine with three Investigate spots. Interact with the one on the right to obtain the Quest Item Picture Commemorating Seirai Island.

Related: How to get a Precious Chest from the paw-shaped rocks in Fort Hiraumi Genshin Impact

Having this item will prompt the World Quest to commence. The quest marker will lead you to Inazuma City, where you must speak with an Adventurer named Furuya Noboru. You inquire about the picture, which he believes is a snapshot of a location in Seirai Island. He directs you to a person named Oda Tarou, whose ancestors inhabited the island in the past.

Follow the quest marker to locate Oda Tarou. He's curious about how his old hometown is doing these days but has trouble finding Adventurers willing to escort him to the dangerous island. You offer to head over to Seirai Island and take pictures of various locations featured in the Picture of Commemorating Seirai Island (II), (III), and (IV).

All four commemorative pictures (including the first from the shrine) indicate a location in Seirai Island. You need to take a picture of them with the Kamera gadget or the Take Photo action in the game menu. Reference the marked-up areas in the image above, which represent the optimal places to stand to take the photos at the correct angle.

The first picture-taking area is located west of Fort Hiraumi. Stand by the cliff to take a photo of the location featured in the Picture Commemorating Seirai Island.

While you can use the Kamera gadget to complete this quest, it's highly recommended to use the Take Photo action from the game menu, as it will notify you about whether or not you're shooting at the right angle. Watch out for the message on top of the screen—it must say Camera has been adjusted to the correct angle.

If you see a different message or none at all, then you're shooting at the wrong angle, and the quest requirement won't be fulfilled. Moreover, you don't have to save the image; just snapping is enough to complete the quest.

Related: Where to farm Amakumo Fruit in Genshin Impact?

The second area is located south of Koseki Village. Stand by the cliff and take a photo at the exact angle shown in the photo above.

The third area is located in "Seiraimaru"—right beside the Phase Gate with two Hilichurls nearby. Defeat the Hilichurls to prevent them from disrupting the photo. If the Phase Gate tries to warp you away while taking a photo, rotate it to deactivate.

Take the last photo north of Amakumo Peak, facing the crater. Make sure the two glowing plants on the left and right are in-frame to complete this shot.

After taking all four photos, bring them back to Oda Tarou in Inazuma City to complete the World Quest. Doing so will unlock the achievement On the Other Side of Homesickness.

Check out our guide on How to complete the Relics of Seirai World Quest in Genshin Impact to meet another character retracing her roots in Seirai Island.