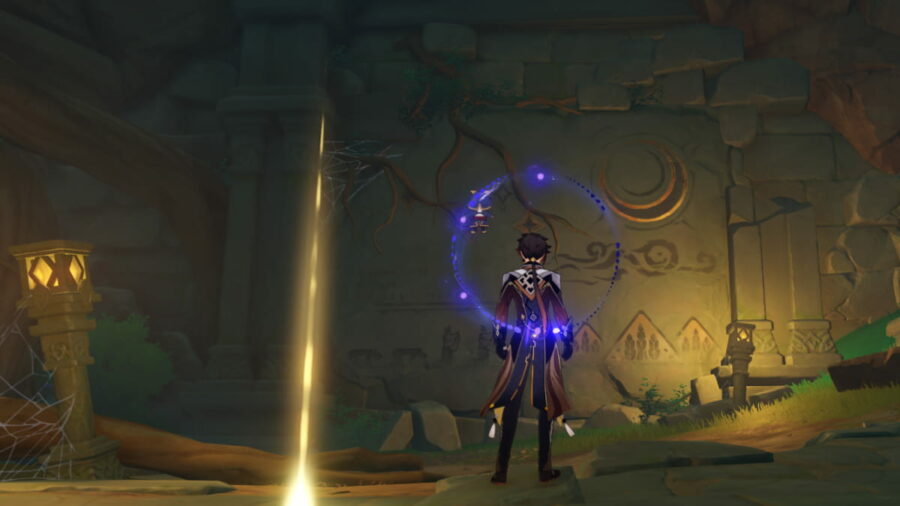 The Saga of Mr. Forgetful is a World Quest that unlocks one real-time day after completing the Octave of the Maushiro.

Teleport to the Tsurumi Island Statue of The Seven, where you'll see Roald hanging around nearby. The thick fog, alongside his horrible memory, made it impossible for Roald to navigate the island. He asks you to give him x10 Fluorescent Fungus.

Speak to Roald again to hand over the glowing mushrooms, which will prompt him to ask you to run another errand. He'll tell you about the murals carved in the walls of caves and asks you to bring proof of their existence by taking photos with your Kamera.

Related: Where to farm Fluorescent Fungus in Genshin Impact?

Head to the Teleport Waypoint in Shirikoro Peak, jump down, and enter the underground passage. There are six murals in total—their locations have been marked up on the map above. Murals four, five, and six are all located in the same room.

In the first location with two Automatons and Relay Stone puzzles, head down the stairs until you reach the damp area, where you'll find a wall with a carving of the Thunderbird. Use the Peculiar Pinion Gadget to reveal a hidden entrance beyond the wall.

Enter the cave and head to the area with the glowing spot on the ground, which indicates the location of the mural. Look up—you'll find the mural, which you should take a photo of using the Kamera or Take Photo action from the menu.

Head deeper inside the underground tunnel and head directly to the second location marked on the map, which is inside one of the cave-like rooms. You'll find a glowing spot, which indicates that the mural is right in front of you. Take a picture of it to complete this part.

The third mural is also straightforward. Simply head to the location marked on the map above, where you'll find a glowing spot indicating that the mural is in front of you. Take a photo of it to complete this part.

The last three murals are all located in the same room. While there is only one glowing spot, you need to take a photo of each mural separately for them to register as quest progress.

Check out our guide on How to complete The Sea of Fog and the Rite of the Trees World Quest in Genshin Impact, which unlocks alongside The Saga of Mr. Forgetful.

Where to find Sunsettias in Genshin Impact