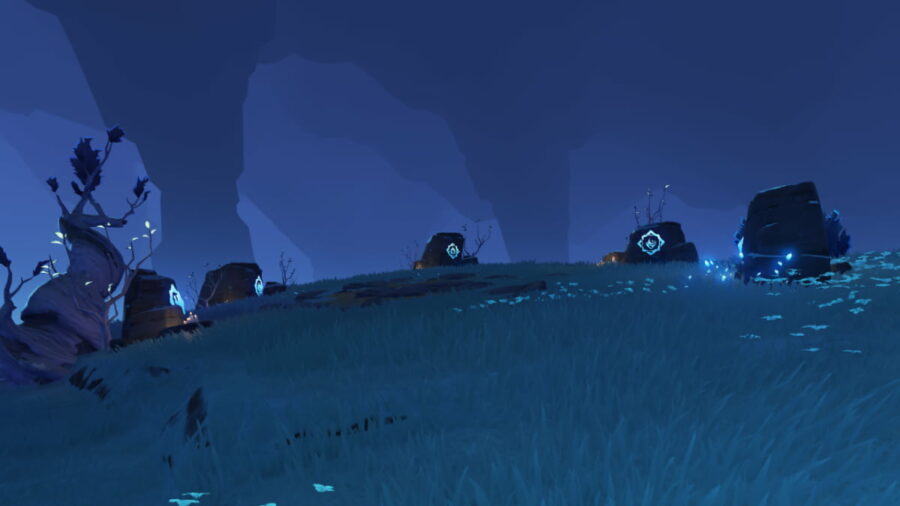 The Serpent's Heart Inquiry is a hidden World Quest that's part of the overarching Hyperion's Dirge questline. It tells the story of Aberaku, who once built the Helios in order to protect the people of Enkanomiya from the Bathysmal Vishaps. But once all was well and safe, children were enthroned and he was framed as a fugitive.

Start this quest by heading to the area circled in the image below. Before departing, make sure that your daylight setting is set to Evernight, and that you have at least one of each of the five Key Sigils in your Inventory.

Related: Where to find Key Sigils in Enkanomiya in Genshin Impact

Once you're in the area, you'll find yourself in a clearing with five landforms that feature each of the symbols found in the Key Sigils. Interact with each stone and unlock them by offering the corresponding Key Sigil.

When that's done, an afterimage named Aberaku will appear. He'll tell you snippets of his past, and how you must take the offerings to a very high place—the place where he was imprisoned. But he must first test your abilities with a Trial. Speak to Aberaku a second time to begin.

You need to defeat Electro, Pyro, and Hydro Abyss Mages within 60 seconds to complete the Trial. If you don't finish on time, you can try again or ask a friend to help you through Co-op mode. When you succeed, a Precious Chest will appear.

Speak with Aberaku once again to obtain the Quest Item Offerings of the Serpent's Heart, which will be used in the Hyperion's Dirge.

Check out our guide on How to complete the Temple Inquiry World Quest in Enkanomiya in Genshin Impact to solve another part of this questline.