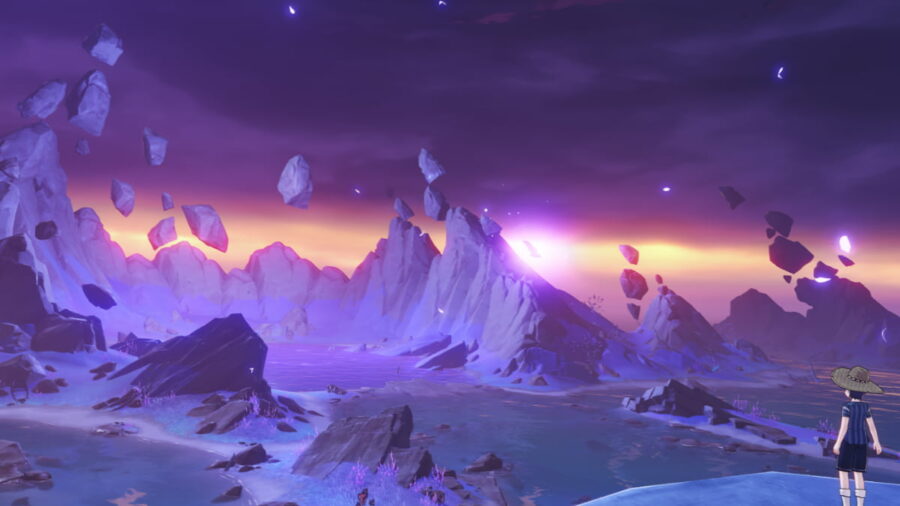 One real-time day after completing The Sea of Fog and the Rite of the Trees, players can unlock The Sun-Wheel and Mt. Kanna. This World Quest is the last part of the Through the Mists questline, finally bringing closure to Ruu, the Thunderbird, and what in the world transpired in Tsurumi Island.

Begin by heading to Tsurumi Island, which is now alarmingly painted with red mist. Follow the quest marker to find Kama, who came to the island on his own accord to help free the illusions from suffering.

After the dialogue with Kama, follow the quest marker to pass through the gate and, once again, disperse the mist blanketing Tsurumi Island. Despite this, the sky remains coated in red. You and Kama decide to find Ruu.

Related: How to complete The Sea of Fog and the Rite of the Trees World Quest in Genshin Impact

Follow the quest marker to Wakukau Shoal, where there is strangely no storm. Speak with Kama and use the Peculiar Pinion Gadget on the Thunderbird Statue.

Monsters will spawn in two waves:

After defeating them, a feather will appear. Touch it to prompt snippets of the Thunderbird's memories to flood into you.

After, follow the quest marker to Oina Beach, where you must repeat the same pattern. Use the Peculiar Pinion Gadget on the Thunderbird Statue and monsters will appear.

Monsters will spawn in two waves:

After defeating the enemies, a feather will appear once again. Touch it to retrieve parts of the Thunderbird's memories.

Related: How to complete the Octave of the Maushiro World Quest in Genshin Impact

Next, follow the quest marker to the Autake Plains, where you'll encounter monsters. Like before, they will spawn in two waves:

Defeating the enemies will prompt a dialogue with Ruu. You explain how Kama is the ancestor of the Kama Ruu knows. You tell Ruu about the outside world and how you're there to help fix the unchanging Tsurumi Island.

While Ruu doubts you, he agrees to watch you activate the Thunderbird Statue with the Peculiar Pinion Gadget. A feather will appear. Touch it to prompt an illusion of Ruu speaking with the Thunderbird, who he named Kanna Kapatcir.

Follow the quest marker to Mt. Kanna. Upon climbing up, you'll find a hollow entrance that leads deep within the mountain. Jump down to reveal a cave containing an altar. Investigate the altar, and a Thunder Manifestation will appear.

The enemy is the same as the Thunder Manifestation in Amakumo Peak, so you can utilize the same strategy to defeat it. As it's immune to Electro, make sure to bring a Main DPS of a different Element.

After defeating the Thunder Manifestation, interact with the Thunderbird Statue using the Peculiar Pinion Gadget. A feather will appear. Touch it and listen to Kanna Kapatcir—it seems that she had been waiting for Ruu the entire time.

Upon consulting with Kama, you try to give Ruu the Peculiar Pinion to help him leave Tsurumi Island.

Follow the quest marker to Seirai Island, where Ruu will sing a song for Kanna Kapatcir.

After the events in Seirai Island, head back to Mt. Kanna. Interact with the altar once again, and all five feathers will come together to revive the tree.

Speak with Ruu, who returns the Peculiar Pinion to you. This time, part of him is in the feather—so he can always go on adventures with you.

Head back to Inazuma City and speak with Sumida. She invites you and Kama to eat at the Kiminami Restaurant, where she reveals her resolve to start traveling to write stories beyond flow charts and character profiles.

Completing this World Quest will grant the Achievements Across the Misty River and Thunder is Forever.

How to complete The Sun-Wheel and Mt. Kanna World Quest in Genshin Impact