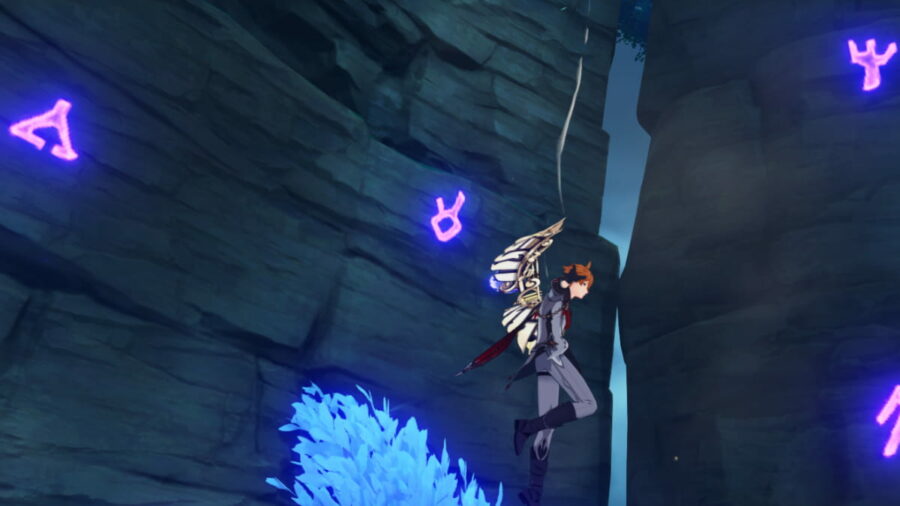 Players can begin exploring all of Tsurumi Island's mysteries by initiating the quest A Particularly Particular Author, which will allow you to clear the heavy mist blanketing the island. But to solve puzzles hidden beneath the Thunderbird Statues, you need to complete the sequel to the World Quest: Octave of the Maushiro.

You need to wait one day after completing A Particularly Particular Author to unlock the second part of Tsurumi Island's story. Octave of the Maushiro will automatically appear in the Quest menu, prompting you to head back to Inazuma City and speak with Sumida.

She'll ask you to return to Tsurumi Island, only for you to find that it's been once again covered in mist. Simply pass through the gate in the highlighted area marked by the quest guide to lift the mist and bring back visibility over the island.

The quest will lead you toward a path where you'll find Ruu. He'll transform the Quest Item, Peculiar Pinion (obtained from the Seirai Stormchasers prequest), into a Gadget. It works like the Memento Lens—only this time, the Peculiar Pinion activates glowing Thunderbird Statues. Equip it to help you complete various instances in this quest.

Ruu will ask you to point the Gadget to a nearby Statue, where you'll find an illusion of Kama. After, dig on the same spot he was in to pick up the Maushiro. Head to the Moshiri Ceremonial Site and interact with the people to listen in on their conversations.

Related: How to get the Memento Lens in Genshin Impact

The quest will direct you to Wakukau Shoal, where you'll fail to find Ruu. Use the Peculiar Pinion to point to a Thunderbird Statue, which will prompt an illusion of Ipe to appear. The first puzzle will start once his dialogue ends.

The Stone Slate puzzle involves hitting the rocks with symbols in the correct order. To find the right order of Ishine Script symbols, approach the Electro Seelie and follow its lead.

You'll find yourself at the edge of a cliff with a lone Thunderbird Statue. Point to it with the Peculiar Pinion to uncover the hidden symbols. Return to the location of the rocks and hit them in the same order as the symbols above, completing the puzzle.

Related: Where to find the three feathers to make an offering to the perch – A Particularly Particular Author World Quest Guide

Continue the quest by heading to Oina Beach. Activate the Thunderbird Statue to summon illusions of Kama and Sayo. After their dialogue, the quest will prompt you to solve the second puzzle.

In this Moving Stone puzzle, interact with the stones to control the direction they move. The puzzle completes after aligning the stones against the landform with a matching symbol.

Start with the stone with a triangle symbol. Select the second option to move it to the landform with a Seelie symbol. After, move it again, and it will align with the correct landform.

Once the triangle symbols are aligned, simply move all other stones inward or to the direction of their corresponding symbol.

Head to Autake Plains. Use the Peculiar Pinion once again to summon an illusion of Ruu, who goes deeper into the area. The mist is heavy, so light up the Electro Torches to prevent being bolted back to the island entrance.

You'll stumble upon a Thunderbird Statue beside an Electro Torch. Interact with it to reveal Seelies. Begin by following the Seelies, which will direct you to pick up missing stones. Once you have all three, return to the puzzle and place the stones in front of each blank stone to open them up and reveal symbols.

The Seelies will also unlock the symbols on the large pillar in the middle of the puzzle, which indicates the order of hitting the smaller stones.

Head back to the Moshiri Ceremonial Site, only to find that there's no one there. Complete the quest by heading back to Inazuma City, speaking with Sumida, and giving her the Maushiro you found in Tsurumi Island.

You'll be rewarded with 500 Adventure EXP, 50 Primogems, five Hero's Wits, 50,000 Mora, and four Mystic Enhancement Ores. This quest is also a prerequisite to the third part of the Through The Mist questline, which will unlock one day after completing Octave of the Maushiro.

Check out our guide on How to solve all Tsurumi Island Relay Stone puzzles in Genshin Impact to help you out on your journey across Inazuma.