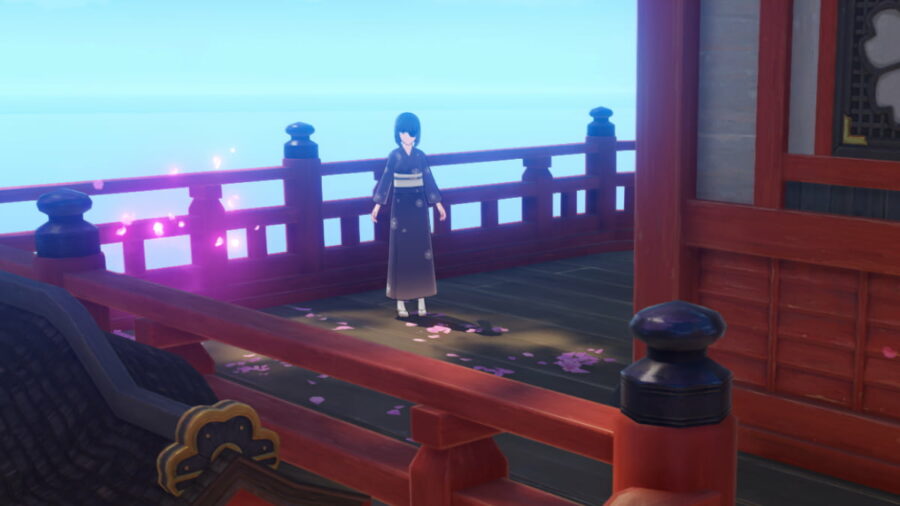 Where the Dandelions Find Rest is the third and final part of The Very Special Fortune Slip World Questline. It automatically starts after completing the prerequisite quest, The Replacement's Secret.

Start by entering the Shuumatsuban's secret hideout north of the Grand Narukami Shrine, only to find that it's been overrun by Fatui. Defeat them and use Elemental Sight to follow Momoyo's trail.

The trail will lead you to an abandoned house on a cliff northwest of Narukami Island. The house serves as an entrance to the quest's Domain.

Related: How to complete the Shuumatsuban Operations World Quest in Genshin Impact

Upon entering, you'll be greeted by some Kairagi. Defeat them and enter the dark entrance at the back of the room, where you'll find a shrine housing an Amulet. Interact with it to pick up the first Amulet and interact with the door to the left to open it.

Upon entering the door, you'll be greeted with a bright room. Go down the stairs at the back of the room and defeat the Kairagi. Make sure to interact with the Start button beside the wagon at the edge of the room.

Once that's done, look up from the left and you'll find a two-part ladder that leads to a clearing on the next floor. Enter the room and interact with the shrine to obtain the second Amulet.

Once that's done, head back down and go up the stairs to the bright room once again. Interact with the lever to open the gate that leads downward. You'll be greeted by a shrine containing the third Amulet, as well as two Fatui that you need to defeat.

After defeating them, interact with the door to the right of the shrine to learn that Momoyo is trapped behind it.

Go to the elevator in the same room to access the next floor. You'll find Kairagi once again. Defeat them then head to the giant door, and the three Amulets you've collected will flow into the naginata at the center. Interact with the door and select Move to enter the boss room.

After the cutscene, defeat the Fatui to obtain the Cell Key. Head back down to the lower floor and interact with the locked room to reveal Momoyo, who lost one eye from Elemental Powder poisoning.

The dialogue with Momoyo will continue until outside the Domain. Once that's done, head to the back of the Yae Publishing House to inform Lyudochka of the good news, only to find that she's gone. Speak to Aratani in front of the same building.

After that, go back to the Grand Narukami Shrine to speak with Momoyo once again. Then follow the quest marker to Ritou and find Lyudochka on a boat located southwest of the island.

You need to speak with Lyudochka twice to complete this World Quest.

Check out our guide on How to change the background music in the Serenitea Pot in Genshin Impact to enjoy your favorite tunes in your portable abode.