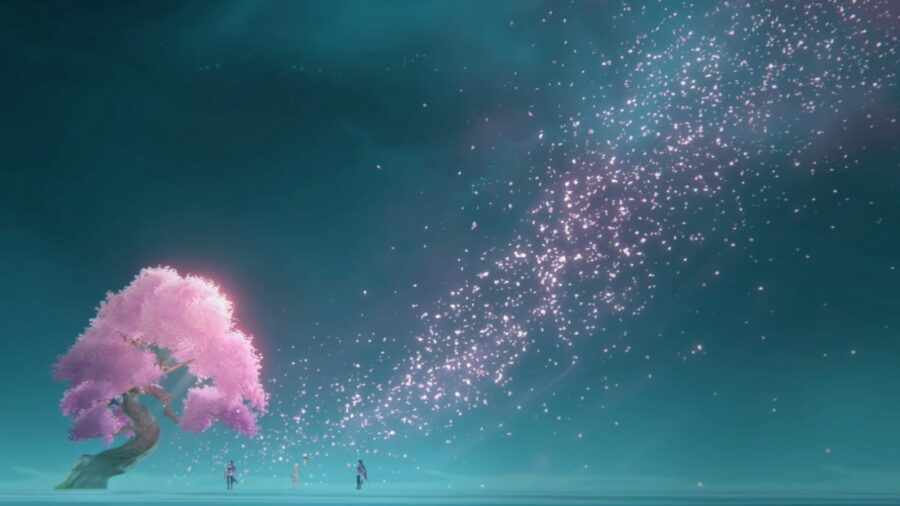 The Raiden Shogun Weekly Boss is located at the End of the Oneiric Euthymia, a Domain situated in the Grand Narukami Shrine. To unlock it, players must complete the second part of the Raiden Shogun Story Quest, the Imperatrix Umbrosa Chapter Act II: Transient Dreams. This quest can be unlocked by completing the following prerequisites:

When all the prerequisites have been fulfilled, unlock Transient Dreams through the Story Quest menu with one Story Key.

The Story Quest starts with Katheryne at the Inazuma Adventurer's Guild. There have been reports of Rifthound activity around the Grand Narukami Shrine, so she asks the most capable Traveler to clear the monsters. Follow the quest marker to the area and defeat a few hounds before chancing upon an encounter with Ei.

You'll be asked to follow traces of Rifthound activity, which are indicated by blue traces on surfaces, as well as a glowing arrow on top. Use the highlighted area in the mini-map as your guide to search for these traces. A dialogue with a memory from the past will prompt, and then the search for traces will continue.

Related: Should You Pull For Yae Miko in Genshin Impact?

You'll then be prompted to defeat Rifthounds using Ei. This is a solo battle, so you can't add other party members to help. After, a dialogue with a memory of Furuyama will prompt. Head to the Kamisato Estate to pick up a tea set, and then return to Furuyama—only to find that he's gone.

A lengthy dialogue over tea will start. Ei will tell you about her twin sister, Makoto, and snippets of the events that occurred 500 years prior in Khaenri'ah. Once that's done, you'll be asked to follow traces once again, and then another solo battle using Ei will prompt. However, make sure to bring a battle-ready team.

During this battle, Ei will experience bouts of paralysis, which can be countered by pressing on the jump key (or clicking the escape button on mobile). Memories of samurai of the past will prompt, and your party will help them defeat Rifthounds.

After, follow the quest marker to the entrance underneath the Grand Narukami Shrine. A torii gate will appear, and inside, you must fight the Raiden Shogun using Ei alone. The boss is not the enhanced Raiden Shogun on a rampage, but the battle mechanics are similar. You can't add other characters to your party, but you can consume dishes to help with survivability.

After the battle, you'll be kicked out of the Euthymia. Head to the Grand Narukami Shrine and speak with Yae Miko. Together, head back to the torii gate. Yae will help you reach Ei.

After a short cutscene, another solo battle using Ei will prompt. You'll be up against the actual Raiden Shogun boss: the Magatsu Mitake Narukami no Mikoto. Ei will be in the Musou Shinsetsu (her Elemental Burst) the entire time, making the battle a little easier. You can also consume dishes to boost her Attack and help with survivability.

Once that's done, a long cutscene will start. The Story Quest ends in the Grand Narukami Shrine, where Ei announces her resolve to abolish the Sakoku Decree and help Inazuma move forward once again.

End of the Oneiric Euthymia

The Raiden Shogun Weekly Boss Domain will be accessible through the Grand Narukami Shrine in both Solo and Co-op modes. She drops the Talent level-up materials Mudra of the Malefic General, Tears of the Calamitous God, and The Meaning of Aeons.

With the Cutscene Impact vibes in this Story Quest, you may be wondering about related HoYoverse projects. Check out our guide on Will there be a Genshin Impact anime? to quell your curiosity.