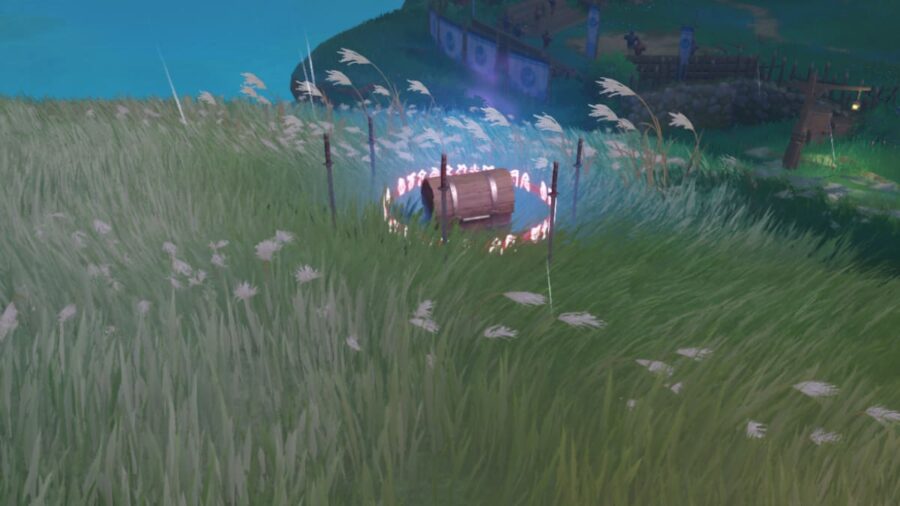 There's no shortage of sword and samurai in Inazuma. Add in some tricks from the nation's resident bake-danuki, and some seemingly simple puzzles can become a bit of a headache to solve.

In Higi Village, you'll find a locked Chest surrounded by swords. There's a samurai camp nearby—but they have nothing to do with this puzzle, so don't be fooled into attempting to defeat them! Start by heading to the exact location marked in the map below to locate the locked Common Chest.

Unlock the Chest by playing with the bake-danuki in the area. Turn your volume up—the sound of the tanuki bell ringing indicates that they're nearby. And the sound gets louder as you get closer to the bake-danuki.

Sprint toward the bake-danuki to "catch" it, which will prompt it to disappear and reappear in a few moments. Do the same approximately four to six times until you reach the swords and unlock the Common Chest.

This puzzle is buggy for some players, so if the bake-danuki stops appearing, simply relog to fix the issue. If the bake-danuki doesn't appear after multiple tries, try running toward the Chest—it will unlock on its own if the puzzle was previously completed.

Speaking of swords and Chests, check out our guide on How to complete the Touch the Sword Hilt puzzle in Musoujin Gorge Genshin Impact.