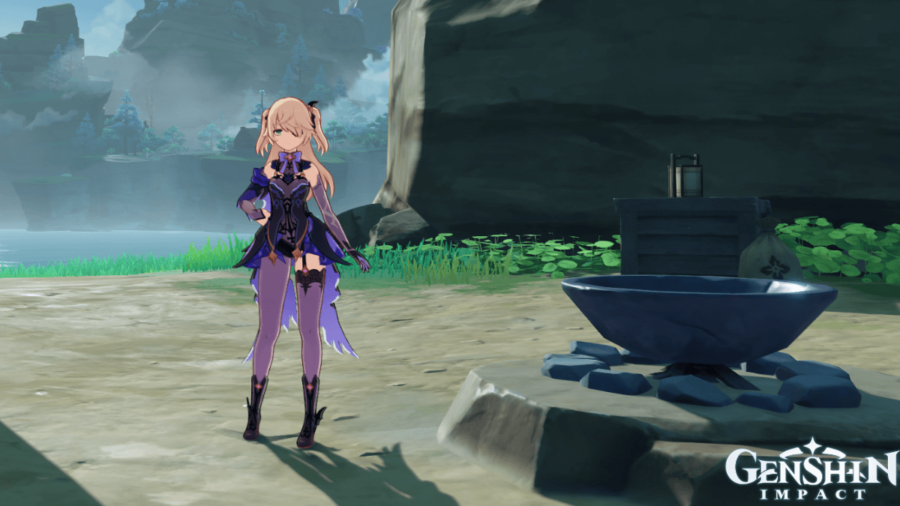 In the Genshin Impact The Gourmet Supremos: The Deep Divers world quest, you'll need to look low. Xudong and the other Gourmet Supremos are inside of an underground cavern, which you can glide down into at the location marked below.

The ingredient that the Gourmet Supremos are searching for this time is Fresh Seagrass.

If you've already completed the world quest Orobashi's Legacy: Part II, you can skip this next step. If you haven't, climb back out of the grotto (teleporting to the nearest waypoint may be easiest). Grab the Electrogram right outside of the cavern opening, drop back down, and pass the barrier to activate the mechanism.

The water will recede, allowing you to explore the ruins below. Defeat three Ruin Sentinels to activate the cubes and gain further passage into the ruins (along with a chest). Deeper inside, you'll encounter a Seelie, which will lead you down a hallway containing the Fresh Seagrass on the right side.

Take down the Slimes that appear, grab the Fresh Seagrass, and follow the Seelie back out of the ruins.

If you haven't completed Orobashi's Legacy: Part II, you'll also encounter a purple rock near the end of the ruins corridor. Pick this up, since you'll need it for that quest.

Use an Electro attack on the Elemental Monument to unlock the ceiling gate, then grab the nearby Electrogram and use the Thunder Spheres to glide up and out of the ruins.

Now just return to Xudong and the others and hand over the Fresh Seagrass to obtain your rewards, which include:

How to get Golden Koi in Genshin Impact