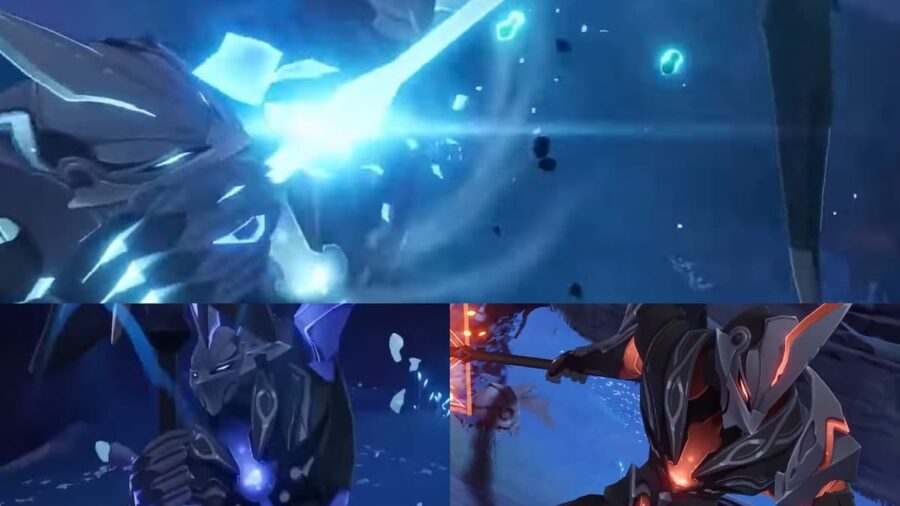 In Genshin Impact, Teyvat has all sorts of monstrous creatures intent on snuffing out humanity. Of all the threats that the people face, however, the Abyss Order is arguably the most dangerous. With Abyss Heralds, Lectors, and Mages at their disposal, this organization wields a terrifying amount of otherworldly power. And, unfortunately for the Traveler, the Abyss Order recently added some daunting new faces to their ranks—Shadowy Husks.

Shadowy Husks are a type of enemy that hails from The Abyss, and there are three types to look out for—Standard Bearer, Line Breaker, and Defender. Each type of Shadowy Husk wields a different weapon and element in battle, along with some nasty passive abilities that trigger when hitting characters protected by a shield.

Fortunately, their passive abilities only trigger when hitting a shield, meaning they can be negated if you avoid using Geo or shield-creating characters. These new enemies can still be a bit tricky to deal with, however, so we've put together a breakdown of the three types and how to beat them.

The proud Standard Bearer wields the Pyro element and a banner, utilizing powerful swings and projectiles to incinerate its enemies to a crisp. This fiery Shadowy Husk variant has access to the following attacks and abilities:

When facing the Standard Bearer, you'll want to avoid using Pyro characters on your team, such as Thoma and Hu Tao. Characters who use Hydro will benefit you greatly, though any element will work, so long as it isn't Pyro.

The Standard Bearer will shoot homing fireballs instead of chasing you down, so keep close to this enemy to prevent it from using this attack. To avoid its circular-swing attack, simply dodge out of reach when the Standard Bearer raises its banner high in the air, then dash back in to continue your assault.

The ferocious Line Breaker utilizes piercing strikes and wide swings, wielding a lance and the Hydro element to drown its enemies. This aquatic Shadowy Husk variant has access to the following attacks and abilities:

The Line Breaker's Hydro dash attack propels it forward in a straight line, though this can be easily avoided by dodging left or right. When the Line Breaker pulls its lance back and starts charging Hydro, put some distance between it and yourself to avoid its stab attack. Like the Standard Bearer, its circular-swing attack can be avoided by simply dodging out of the lance's reach, then dashing back in to continue your assault.

The hulking Defender wields a bow and the Cryo element, raining down freezing arrows on its enemies. Under the right conditions, they can also wield a sturdy shield in place of their bow. This frosty Shadowy Husk variant has access to the following attacks and abilities:

The Shadowy Husk: Defender utilizes the Cryo element, so you'll want to avoid using Cryo characters on your team, such as Kaeya and Shenhe. Characters who use Electro will benefit you a great deal, however, by triggering damaging Superconduct reactions. Like the other Shadowy Husks, any element will be effective enough, so long as it isn't Cryo.

The Defender will charge up arrows aimed directly at the active character, which can be dodged with the proper timing. When the Defender aims up the sky and fires, look out for a red ring on the ground. This ring shows where the Cryo Area-of-Effect will fall, giving you a handy visual of which areas you should stay away from on the battlefield. The Defender is a distance-based fighter, so get up close to overwhelm this enemy.

Shadowy Husks are a tricky new obstacle to overcome, but it can be done with a bit of preparation. Look out for their televised attacks, avoid characters that can create shields, and negate their passive abilities. Just remember these three tips, and you'll surely emerge victorious!

Looking for more great Genshin Impact content? Be sure to check out How to obtain the Mudra of the Malefic General, Tears of the Calamitous God, and The Meaning of Aeons Talent Level-Up Materials in Genshin Impact here at Pro Game Guides.