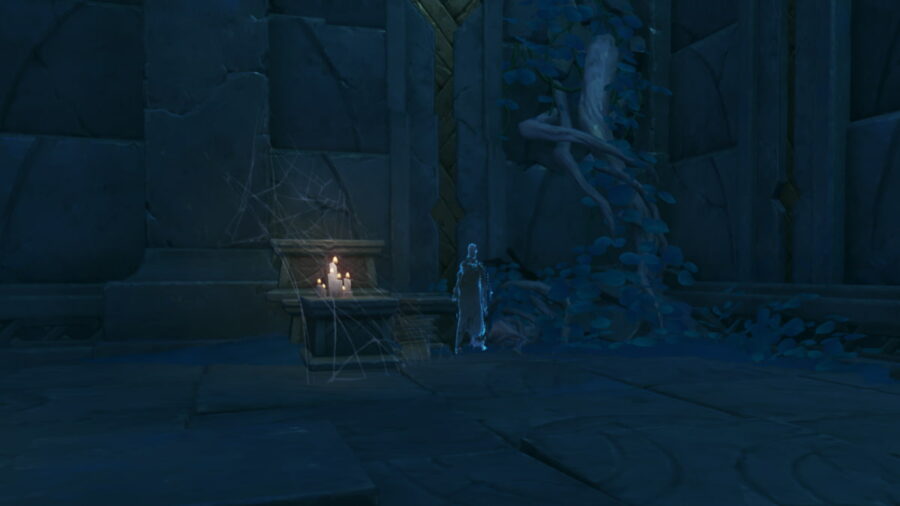 Gama is one of the many afterimages that can be found in Enkanomiya during Evernight. Speaking to him will give you hints on the locations of two Chests in the region, but only if you haven't already found them. Regardless, finding Gama involves completing a small puzzle that will help you advance your exploration progress.

Start by heading to the area circled in the image below. Make sure that your daylight setting is set to Evernight. Once there, you'll find two Pyro torches in front of a locked gate, as well as a stone wall beside them.

Related: How to get 100% exploration in each area of Genshin Impact

Activate the two Pyro torches with a Pyro Skill to open the gate. Inside, you'll find a glowing mechanism. Interact with it to move the stone wall, creating an opening on the right.

Head inside the entrance created by the stone wall, and three Thundercraven Rifthound Whelps will spawn. Defeat them and head deeper into the cave. You'll find yourself at a dead end.

Look up to spot a crack in the ceiling. Climb up the pillar to get to the second floor where you'll meet the afterimage of Gama. Speaking to Gama will give you clues on the locations of two Chests in Enkanomiya. However, if you've already found them, the afterimage won't have much left to say to you. You can exit the ruin from the window on the same floor.

Check out our guide on How to unlock The Very Special Fortune Slip World Questline (SHUUMATSU GAIDEN Achievement) in Genshin Impact for more Genshin Impact.