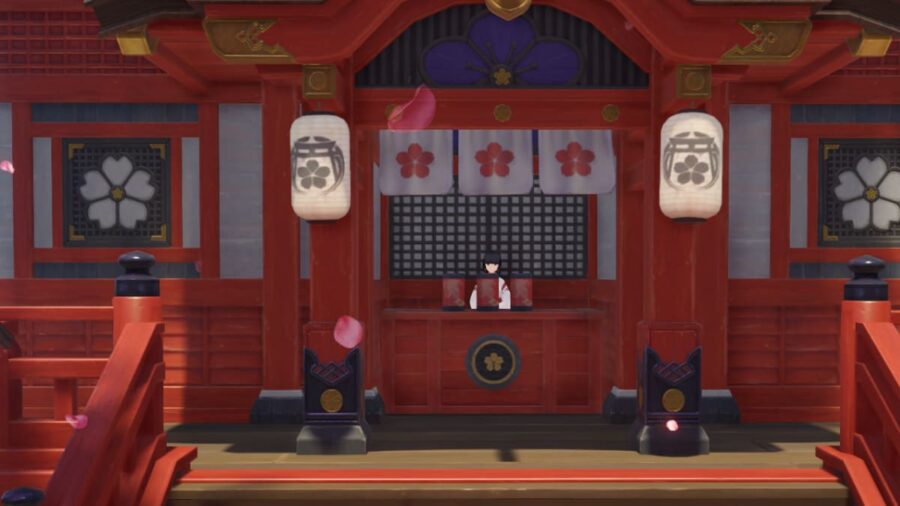 The Very Special Fortune Slip is a World Questline that can be unlocked after completing a Hidden Exploration Objective that starts at the Grand Narukami Shrine. Completing this prerequisite will also grant you the Wonders of the World Achievement called SHUUMATSU GAIDEN. While this series of objectives runs for four real-time days, skipping days won't affect your progress.

To start this Hidden Exploration Objective, you must have drawn a Fortune Slip in the Grand Narukami Shrine at least once. If you haven't, head to the shrine to the right of the Sacred Sakura and speak with Gendou Ringo to draw a Fortune Slip. Keep in mind that you can only draw one Fortune Slip per day.

Once that's done, you should be able to spot a Fatui camp upon reaching the location marked up in the map above. If you don't see the Fatui, it means you haven't drawn a Fortune Slip at least once from the shrine.

Defeat the Fatui and interact with the Investigate spot beside the Common Chest. You'll receive Tattered Notes.

Go to the Grand Narukami Shrine and draw a Fortune Slip from Gendou Ringo. Speak with her again and choose the option (Hand over the fortune slip) in the middle of a hazy night. You'll receive a Strange Fortune Slip that contains some information and a visual of a location in Inazuma.

Head to the area circled in the image above. It's located in the cave underneath the Tenshukaku, so jump down to the shoreline and access the area from there. Defeat the enemy called Fireblade Morisu, as well as some stray Kairagi.

One real-time day later, head back to the Grand Narukami Shrine and draw another Fortune Slip. Speak with Gendou Ringo once again and, like before, select the option (Hand over the fortune slip) in the middle of a hazy night. Head to the area circled in the image above and defeat Mousey Maki.

Again, one real-time day later, go to the Grand Narukami Shrine and draw another Fortune Slip. Speak with Gendou Ringo and select the option (Hand over the fortune slip) in the middle of a hazy night.

Change the in-game time to anywhere between 00:00 to 06:00, then head to the area circled in the image above. Like the first day, you must drop down to the shoreline under Inazuma City and access the marked-up spot from there. Defeat Norishi: Kikouban and three Yoriki Samurai to complete this day's objective.

Wait one real-time day once again before heading back to the Grand Narukami Shrine. Speak with Gendou Ringo and select the option (Hand over the fortune slip) in the middle of a hazy night. Head to the location circled in the image above. It's the cave west of the Teleport Waypoint, under the cliff.

You'll find some Kairagi. Defeat them and interact with the glowing Investigate spot by the cooking pot.

After, head to the area circled in the image above and defeat Demonbane Kim.

After all four of the above objectives are complete, go back to the Grand Narukami Shrine (no need to wait another day). You'll find a glowing Investigate spot in place of Gendou Ringo. Interact with it to obtain information on a final location.

Head to the broken bridge northeast of the Grand Narukami Shrine. Its exact location is circled in the image above. You'll find a glowing Investigate spot. Approach it, and you'll be knocked unconscious.

After waking up, a dialogue with Gendou Ringo will prompt. She'll reveal that she's a part of the Shuumatsuban, ninjas who perform covert operations within Inazuma. After the dialogue, the Hidden Exploration Objective will complete. Make sure to explore the cave to unlock a Luxurious Chest.

Check out our guide on How to unlock the “Boatman’s” Hidden Objective in Genshin Impact to explore more Hidden Exploration Objectives in the game.