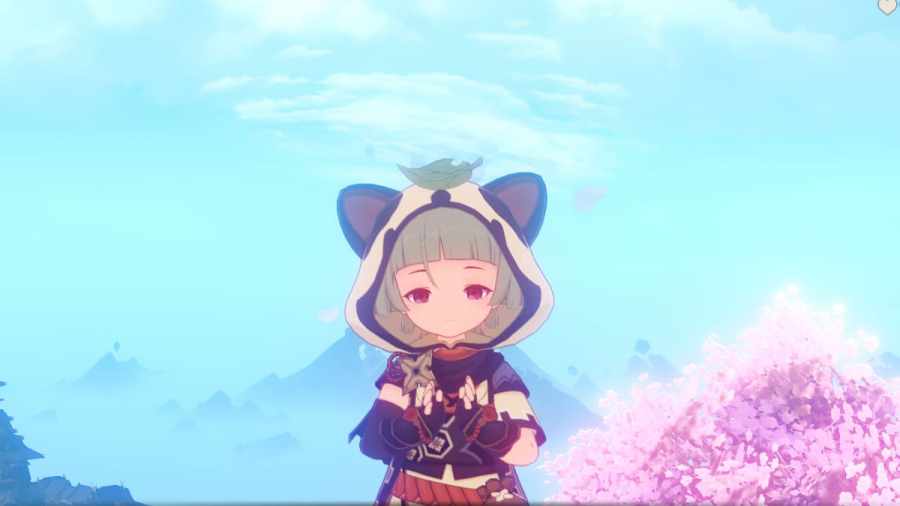 Sayu, one of the Yashiro Commission's beloved Shuumatsuban ninja, is a little obsessed with growing taller (and sleeping to achieve that goal). But she's proven to be an incredibly reliable ally after helping players in the Archon Quest Omnipresence Over Mortals. Spend time with this pint-size ninja by unlocking her Hangout Event with two Story Keys.

Completing the Hangouts will reward you with Adventure EXP, Primogems, Hero's Wits, Guide to Light, Vayuda Turquoise Fragments, Achievements, and Dizziness-Be-Gone no Jutsu Version 2.0. There are no bad ends, so enjoy your time hanging out with the adorable Mujina ninja!

Ending 1: Everything in Moderation

The Hangout starts with following Sayu, who has disguised herself as a barrel with a leaf. But you easily find her due to her tail sticking out. She starts to talk to you about her job as a Shuumatsuban ninja and how it entails assassinations. Later, you find out that she's been tasked to assassinate you.

You confirm this information with Kano Nana, the priestess in charge of supervising Sayu's training—of course, without revealing that you had met Sayu. She offers to investigate the assassination request. Respond with "Thank you, that could certainly help."

Kano Nana eventually detects Sayu's presence and forces her back into ninja training in Chinju Forest, where you agree to accompany her. Upon arriving, Kano Nana leaves the scene, prompting a conversation with Sayu about her height. Choose the option "Growing taller is what you really care about, isn’t it?" And then "Sleep alone isn’t enough to make you grow taller." Sayu then suggests you go out to get some food. As she overeats in Kiminami Restaurant, select the option "Do you still wish to continue?" to complete this Hangout route.

Start from the dialogue route Recharge Plan, which will bring you back to Kiminami Restaurant. But instead of asking Sayu about continuing her overeating, choose the option "Eating like this might have a negative effect on your health. Maybe we should consider some other options."

This will prompt you to suggest a training activity by taking a Commission instead. The restaurant owner, Kiminami Anna, will ask you to clear the Treasure Hoarders nearby. After defeating them, take Sayu to a high point to experience the feeling of being high up.

Start this Hangout from the Give It Up! dialogue route. In your conversation, choose the options "Growing taller is what you really care about, isn’t it?" and "It’s not the amount of sleep but the quality of sleep that’s keeping you from growing."

After, you'll head to her favorite napping spot, only to find that it's been overtaken by Pyro Slimes. Defeat them and accompany Sayu to her backup napping spot—but it has turned into a Shuumatsuban training spot by Kano Nana. Help Sayu pick up the training tools and head to the Narukami Shrine to find a new napping spot. You need to go to the Sacred Sakura Tree without getting detected, so run fast to avoid the Commissioners' eyes. Unfortunately, Kano Nana will eventually find Sayu, prompting the latter to run away.

Ending 4: With The Trees

Start from the dialogue route Give It Up! This time, convince Sayu to train by choosing the option "I can see that you’re tired, but it’s not good to neglect your work either". She'll invite you to go on a ninjutsu training session, which begins with an obstacle course. Simply ignore the obstacles and walk by the lighted areas, and complete the course within 90 seconds. Doing so will unlock the achievement Mujina-Class Ninja.

After, you'll participate in a live training session, where you control Sayu to defeat Slimes. After, she'll suggest taking a break, where she'll tell you more about her sensei.

Start from the Shuumatsuban Visitation? dialogue route, which starts by meeting with Sayu's supervisor, Kano Nana. In your conversation with her, select the option "While you are making inquiries, I shall continue investigating on my own, just to be safe." This will prompt her to leave the scene.

After, you discuss the assassination request with Sayu and decide to investigate a suspicious individual from the Yashiro Commission. She leaves to send a fake report, and the Commissioner responds by requesting a meet-up near Byakko Plain. Select the option "Tell us the truth, no more lies", and he'll admit to forging the request to save his daughter, who the Kairagi kidnaped. Defeat the Kairagi to save his daughter and complete this Hangout Event.

There, you meet Kamisato Ayaka, who confirms his story. She's a little hard on Sayu, so the latter goes off to spend some time alone. Head over to the balcony and comfort Sayu to complete this Hangout Event.

Completing all six endings will unlock the achievement Taller by Half.