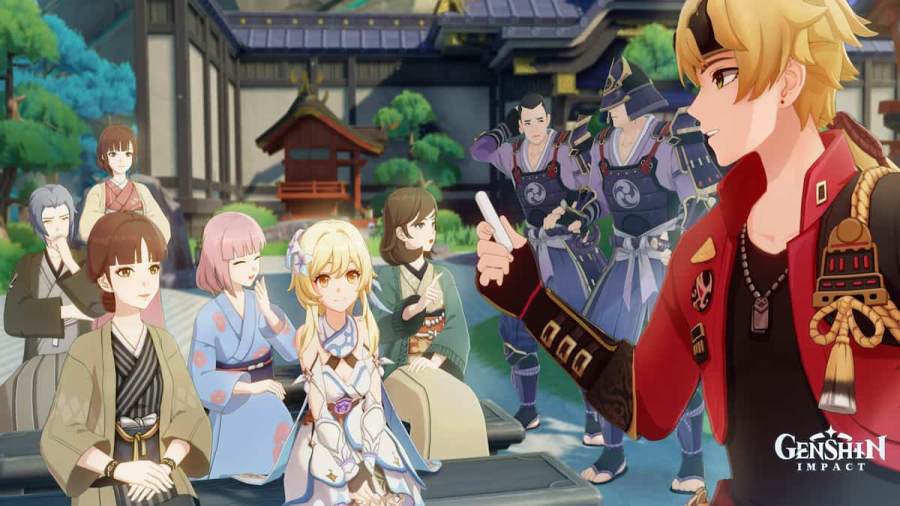 Thoma is a beloved character that accompanies players in their adventures in Inazuma. His hangout event, which you can unlock with two Story Keys, will give you the opportunity to spend time with the Kamisato Clan's charismatic housekeeper and learn a thing or two about him. In total, there are six endings to unlock and no bad end, so don't worry and enjoy your time with Thoma!

Some samurai from the Yashiro Commission are gossiping about Thoma. It doesn't matter what choice you make for the first dialogue—your decision won't affect any of the endings. Once Thoma arrives, he fulfills his promise to go out with you. Select the option "Let's stay indoors," which will prompt a meal with Thoma in the Komore Teahouse.

You get into a conversation about Thoma's amazing culinary skills and his knack for housework. Select the dialogues "You could run a housekeeping class for the Yashiro Commission" and "We need to get out there and spread the word." Gather participants for the housekeeping class and reassure Thoma by selecting "I'm sure lots of people will come." Spoiler alert: it worked!

Start by heading to the Hangouts menu (Quest > Story Quest > Hangouts). From Thoma's Hangout, select Itinerary and click Continue Playing on the bottom right of the screen. Doing so will allow you to start from the Itinerary dialogue branch so you don't have to redo the first part of the Hangout.

Complete this Hangout to unlock the achievement Housekeeper Extraordinaire.

Continue playing from the Itinerary dialogue. This time, select "Let's head out." Thoma will give you the option to see small animals or head to the city—choose "I wanna see these cats and dogs!"

After feeding some stray animals in Hanamizaka (in the outskirts of Inazuma City), Thoma will suggest meeting a ninken by the beach north of Konda Village. Choose "Why don't we go and see it together?" to continue the story. While trying to coerce the ninken into joining you, select the dialogues "Thoma..." and "It still doesn't want to cooperate." After some help from the Yashiro Commission's Shuumatsuban, you'll eventually be able to win the adorable ninken's heart.

Complete this Hangout to unlock the achievement From the Sea Never Returning.

Start from the dialogue path Under the Same Shade. However, instead of suggesting to go visit the ninken, choose "Perhaps you should give it time to calm down." This response will prompt Thoma to come up with an adorable plan to dress the stray cats and dogs in hand-made knitwear for the winter! Help him take measurements and meet him the next day. Let him know that "They're super cute." to complete this Hangout event.

Warning: Accidentally hitting the attack button will scare the animals away, which will force you to restart the Hangout from any dialogue path.

Start from the Itinerary dialogue and select "Let's head out." and "Let's hit the town." Thoma will then take you for a stroll in Ritou, where you first met! He talks about growing up in Monstadt— respond by selecting the dialogues "Yes, I have." and "You'll get the chance one day." Afterwhich, enjoy the rest of the Hangout however you want. Completing this event will grant you a Lucky Omamori—Thoma's precious lucky charm!

Ending 6: The Housekeeper's Other Side

Start from the beginning of the Hangout Event, but this time, select the dialogues "Sorry, I can't say I agree" and "It makes me uncomfortable." Speak with Kiyoe in front of the Inazuma Reputation Board to move the story forward—she's in a pinch because the festival's coming up, but the ship containing the ceremonial implements was hit by a storm. The ever-reliable Thoma will step in to help. Make sure to select the dialogue "I want people to give you the respect you deserve."

After, you'll accompany Thoma as you find a way to convince a greedy merchant to sell the Yashiro Commission replacements for the ceremonial implements.

Complete all six endings and unlock the achievement Everyone's Happy!

Learn more about Thoma by checking out our guide on Who is Thoma in Genshin Impact?