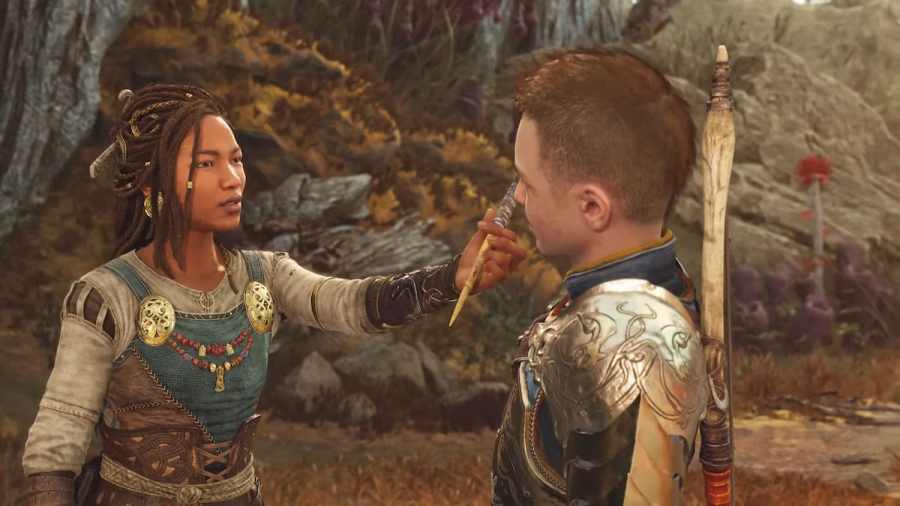 During their travels in God of War Ragnarök, Kratos and Atreus meet many new companions and allies. One such character is a very important person to Atreus, Angrboda. She was teased early on when Ragnarök was still developing and sent the gaming world into a frenzy. So, who is this mysterious girl, and who are her parents?

Angrboda is one of the last living Jötunn in the nine realms. Alongside Atreus, Thor, Gryla, and Thrúd, she makes up the last of the living giants. This is largely due to the genocide that Thor unleashed on the race. Angrboda is the grandaughter of Gryla through her father and the daughter of unnamed parents. Angrboda's role is determined by the prophecy her mother foretold. She is to relay to Atreus information about the giants through the murals she and her mother painted. She is also to give the young lad the marbles that house the last giant souls that her father created.

Related: How to get Runic Summoning in God of War Ragnarök

Angrboda's relationship with her last living family member, Gryla, is fraught with turmoil. Gryla does some truly horrendous things to the wildlife in the Ironwood, but Angrboda is conflicted as the giant is her last living relation. Gryla blames Angrboda's mother for what happened to her son and, by extension, holds Angrboda accountable. Beyond that, we don't discover much about this charming young lady. Her place in Norse mythology is even more limited as she is simply known as Loki's partner and the mother of monsters. Here's hoping we see more of her in the next installment.

For more God of War goodies, check out How to beat The Hateful in God of War Ragnarök on Pro Game Guides.

Who are Angrboda’s parents in God of War Ragnarök?