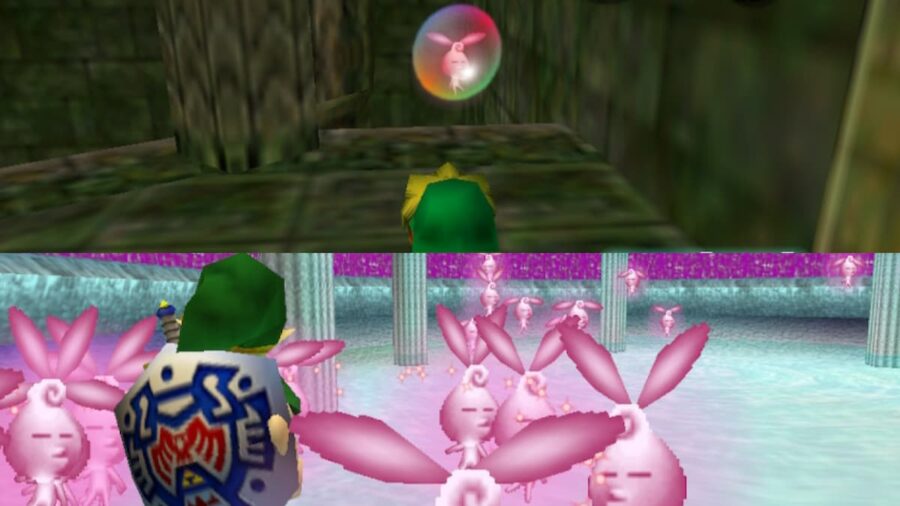 Skull Kid has been using Majora's Mask to make a mess of things in the Southern Swamp, tainting the land's once crystal-clear waterways with a powerfully putrid poison. As a result, the residential Great Fairy's body has shattered into 15 miniature fairies, and you're the only one who can round them up to restore her former glory. Finding all 15 can be a bit tricky, however, so we're here to help—here are all Stray Fairy locations in Woodfall Temple.

Where to find the Woodfall Temple Stray Fairies

The Stray Fairies hiding in this eerie temple glow with a pink hue, and there are a total of 15 fairies scattered throughout the Woodfall Temple. Their locations are as follows:

Once you've collected all 15 Stray Fairies, exit Woodfall Temple and use the nearby Deku Flowers to reach the Great Fairy Fountain. Upon entering the fountain as human Link, the wayward fairies will group together to reform the Great Fairy of Power in all her splendor. You'll be rewarded with the Magic Spin Attack in return, which can be used by pressing and holding B to imbue your sword with magic, then releasing B to unleash a devastating circular swing!

All stray Fairy locations in the Woodfall Temple – The Legend of Zelda: Majora’s Mask (N64/Switch version)