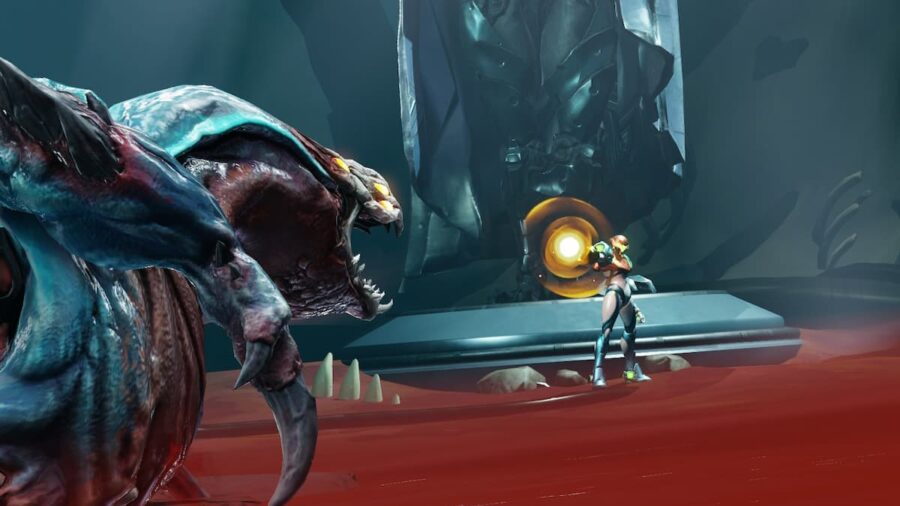 Not counting the E.M.M.I. and the Central Units, the first boss you will face is Corpius. This alien monster has a few nasty tricks, including a scorpion tail, poisonous breath, and the ability to turn invisible. You will need to learn its patterns if you have any hope of defeating it and surviving. You can find some tips below.

In the first stage, Corpius will fire poison balls at you and try and impale you with its stinger. You can fire missiles and charged beam shots at its face to damage it while dodging the tail and poison. If you can get within its tail, you can damage it freely as it attempts to pull its stinger out of the ground.

Related: How to parry in Metroid Dread

After you blast it for a while, it will transition into its second phase, where it becomes invisible. A bulbous spot on its tail lights up, revealing a new weak spot. You can still fire charged beam shots and missiles at its face. but you can shot regular beams at the glowing spot. A cutscene will play and blue magnetic spots open on the walls.

You will need to slide underneath Corpius at this point. Be prepared to parry, or you will get hit by its tail. Corpius will use a new attack where it breathes poison all along the ground. Jump to the magnetic wall to dodge it. In this phase, attack its face or tail until you defeat it. You will likely need to slide underneath it again at some point, so be ready to parry.

Corpius isn't the toughest boss if you learn its patterns and aim your shots well. Defeat this boss for a cool cutscene and worthwhile reward.