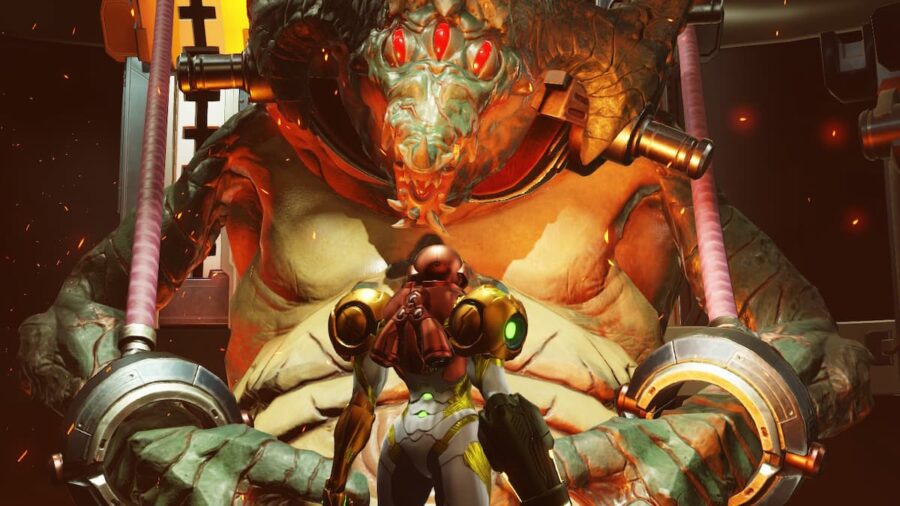 Metroid Dread is filled with content ranging. This includes abilities and upgrades to collect, multiple areas to explore, and numerous bosses to battle. These can take the form of mini-bosses like the Central Units and the E.M.M.I., but each area also has a main boss.

The boss of Cataris is Kraid, the giant three-eyed reptilian alien. The primary method to defeat Kraid is to blast his open mouth with missiles and charged shots. Kraid has multiple phases the player will have to defeat, with each requiring different strategies.

Related: How to teleport in Metroid Dread

The first phase sees Kraid using projectiles. Kraid will either launch projectiles from his mouth—one a burst of flame that cannot be destroyed and the other a reddish-purple ball that you can destroy for small amounts of health. The other will have Kraid throw his claws at Samus, which you can destroy for missiles.

After enough damage has been done to Kraid, his arm shackles will break, and he will destroy the platform Samus has been using and expose his belly button. From this, he fires purple projectiles Samus can destroy for health and missiles. Occasionally he will shoot balls of poison in which Samus must wall jump to avoid.

Another type of attack will launch spines into the wall. Players should duck to avoid this or use the magnetic blue panel revealed to go up top. Here they can fire missiles and charged shots into Kraid's mouth. He will launch claws or try to swipe his arm at Samus.

Players will have the opportunity to counter Kraid's attack up top. A cutscene will trigger after dealing enough damage to Kraid, showing the defeated Kraid sliding into the lava and Samus standing victorious.