Ancient Debris is a new addition to Minecraft that allows you to obtain Netherite! We're taking a look at exactly what you need to do to find it, because this new resource will allow you to upgrade your gear to the highest current level available.

Ancient Debris is added in the Nether 1.16 Patch that will be available for Java and Bedrock. It can only be obtained in The Nether, and is used for upgrading Diamond tools to Netherite tools, armor, and weapons that are the most powerful items in the game. This gear cannot be destroyed in fire, and it has very high durability, so you can use it for a long time!

If you're starting a new world in the update, check out our Minecraft 1.16 Nether Seeds post!

How to Find Ancient Debris

Ancient Debris can only currently be found in the Nether, so you will need to create a Nether Portal and be prepared to fight off quite a bit of the evil that dwells in this area. You'll recognize Ancient Debris by it's brownish color and spiral like design on top. You can ONLY mine it with a Diamond or Netherite Pickaxe, if you try and use something else you will get nothing. 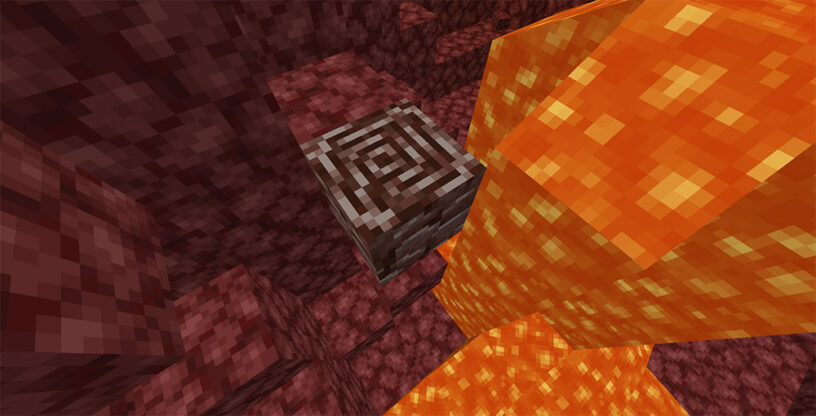 Once you've reached the Nether, you will need to head to the lower levels of it like you would for Diamond. Ancient Debris should start spawning in Bedrock at around Y level 30 so, but the best place to farm it is from Y level 8 to 17. In Java, it appears that the spawn rate isn't as good as Bedrock, and the best places to get it are Y level 12 to 17. These are the areas you should focus on farming, because they have the highest density of spawns. You can check for your current level on Java by pressing F3 on your keyboard and looking for the XYZ listing. If you're on Bedrock, make sure to enable the "show coordinates" option in your settings.

Once you've reached the level you want to farm, you can start strip mining and hope to run into some. It's pretty rare, so expect spawn rates to be similar to Diamond. It spawns in smaller mineral veins than Diamond, you will only find 1-3 per pocket.

If you don't want to mine, you have another couple of options available to you: Exploding Beds & TNT. Ancient Debris is blast resistant, so you can blow up large areas and hope to run into it. This is going to likely be the easiest way to obtaining a lot of this stuff in the shortest amount of time.

What are exploding beds? Well, you can't use a bed in The Nether, so if you place one somewhere and attempt to use it, it will explode similar to TNT. Creating a bunch of beds is a lot easier than farming up TNT, so this is the preferred method of doing this kind of farming. Not only that, beds explode in a greater radius than TNT, so it's going to be more efficient as well!

TNT is still usable, and I have found that you can place a TNT with a four block gap between them and have them trigger each other without dropping. This will create a nice chain-reaction of explosions that will clear out a large area which will hopefully help you find Ancient Debris.

Another nice thing about Ancient Debris is you don't have to worry about it being destroyed by lava because it floats in it!

Make sure to have yourself at least some decent armor so you can fight off any monsters you come across and survive a blast or two if you take a hit. Fire Resistance potions are also a good thing to have if you want to be safer. I would make sure to have at least one piece of gold armor on you, because it keeps Piglins from attacking you. Make sure to have a Diamond/Netherite Pickaxe so you can mine the Ancient Debris. You'll want to stockpile your explosive materal, whether it's TNT or beds. Again, beds are far easier to come by, plus you can carry planks and wool on you to craft more.

Create a long strip mine tunnel (2 blocks tall) at the ideal coordinates for your platform (Bedrock: Y-12, Java: Y-16). Now, every eight block make a single block hole as deep as you can. Place the bed at the very back of the hole then interact with it. It will explode and you will take some damage based on your armor. Continue to repeat this process and you will find yourself plenty of Ancient Debris!

That's all you really need to know about Ancient Debris and how to find it! If you've looked for Diamond in the past, you will really not be a stranger to this type of thing. However, hunting down this resource might be a bit more on the dangerous side!

Now that you've got some Ancient Debris, be sure to check out how to craft Netherite Armor, Weapons, and Tools!