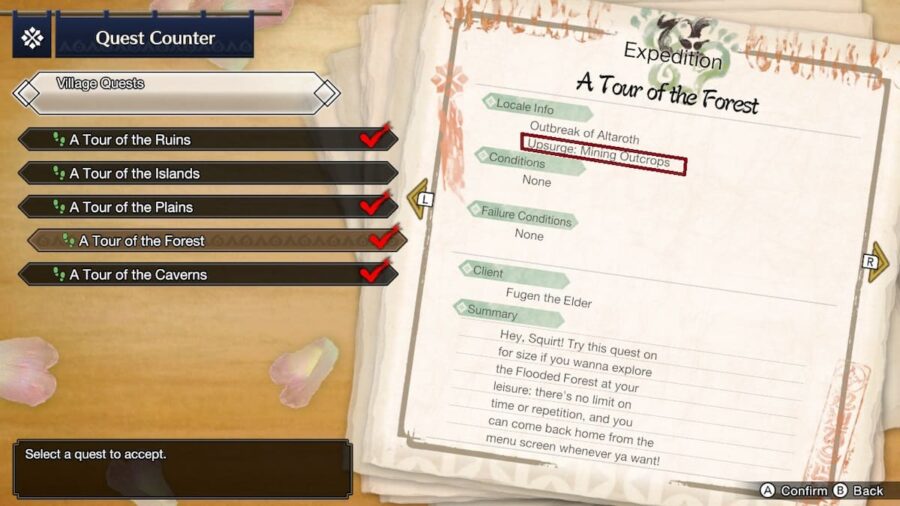 There are two main methods of farming money, or Zenny, in Monster Hunter Rise. The first involves visiting the Flooded Forest during a Mining Upsurge and collecting as much Ore as possible to sell. The second method is to farm the Gotta Hoard Fast! quest to get rewarded with Golden Eggs when completed in under five minutes. These are the best money farming methods in Monster Hunter Rise.

Selling items is the best method of getting Zenny in Monster Hunter Rise as the rewards for doing hunts aren't very high. Ore and Golden Eggs are the primary resources that players will be collecting to sell. The most effective method of Zenny farming is going to the Flooded Forest during a Mining Upsurge in order to sell all the collected ore. The second most effective method, requiring less work, is to simply do the Gotta Hoard Fast! quest in under five minutes to get Golden Eggs.

How to farm for Ore in the Flooded Forest

Going on an Expedition Tour of the Flooded Forest or any map during a Mining Upsurge increases the number of items a player can gather at each Mining Outcrop. Novacrystals are worth 2440 Zenny a piece and can only be found in The Flooded Forest. Players can collect multiple Novacrystals during these Mining Upsurges and can be farmed easily as long as players know where each Mining Outcrop is.

Related: How to farm for Zinogre Plates in Monster Hunter Rise

To make routing easier, players can choose to have their mini map in Detailed. This is done by going to the Options in the System tab of the menu and going to HUD Map Type. The Detailed Map will display all the gathering areas that players are looking for without having to expand their map. When collecting from Mining Outcrops, players can obtain an additional item if they have the Geologist Skill at Level Three.

What armor has the Geologist Skill?

Players that don't have three Geology Jewels will have to wear armor with the Geologist Skill instead. The armors that have the skill are: