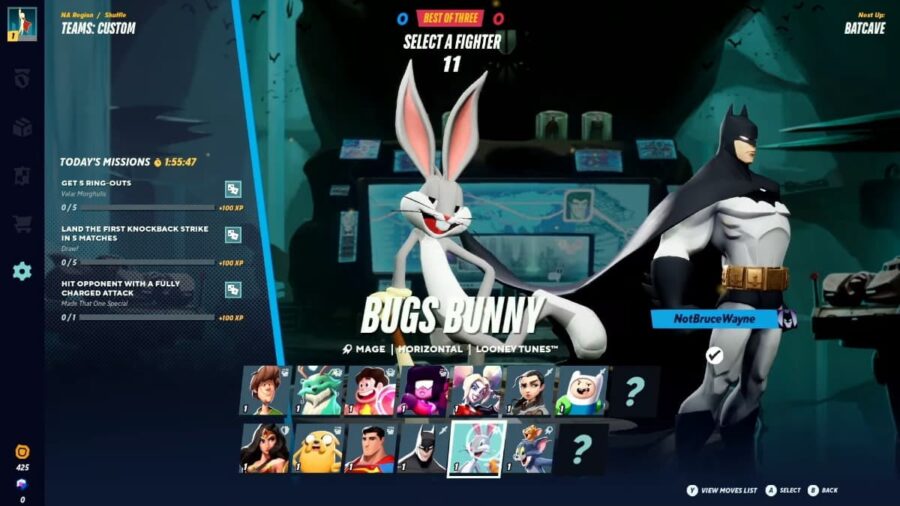 In MultiVersus, players will get to choose from a range of iconic characters from popular culture, and one of them includes Bugs Bunny from the Looney Toons. If you are looking for a character to attack opponents from distance, then Bugs Bunny is the perfect Mage to choose in MultiVersus. Here's everything you need to know about Bugs Bunny's moves, perks, and strategies in MultiVersus.

How to play Bugs Bunny in MultiVersus

Bugs Bunny is a Mage character who can summon objects to attack opponents, and quickly move away from attacks. This character has a versatile range of abilities that can be effectively used to devastate opponents while providing support for allies. Here is how to play Bugs Bunny in MultiVersus.

All Bugs Bunny moves in MultiVersus

Perks unlock as you level up your character, and are exceedingly efficient in turning the tide of any fight. Having the same Perks as your partners yields bonuses in 2v2 matchups. While Bugs Bunny has a few Perks, we recommend using the below once you increase the character's Mastery Level.

Tips and Strategies for Bugs Bunny in MultiVersus

Bugs Bunny is agile and it's best to fight with this character from a distance. His passive ability allows allies to get random items. Bugs Bunny's Special Delive-Rocket is slow but massive in size. Although it can be avoided, the rocket ends up damaging opponents more often than not. Similarly, Bugs Bunny's Pie attacks can be highly effective, but it ends quickly when overused.

Swing Batta Batta! and Ain't I A Charmer are strong attacks that can devastate opponents. You will also get to burrow and go underground as Bugs Bunny, and deal a little damage while coming out. Make sure to always check your position before doing this, so that allies can use the tunnel too. It is best to avoid fighting at close range with Bugs Bunny, as this character can perish easily against stronger opponents.

For more information on MultiVersus, check out Will Walter White be in MultiVersus? and MultiVersus Velma Guide – Moves, Perks, Tips, & Strategies on Pro Game Guides.