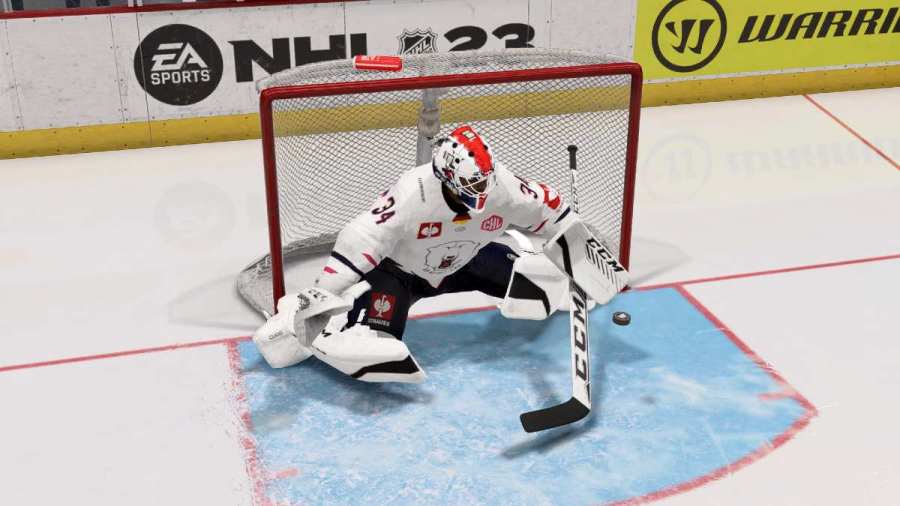 Playing as the Goalie in an NHL game can be very difficult, especially if you are new to the game or sport. In NHL 23, Goalies face an even more difficult challenge with the new X-Factor abilities that allow players to make lacrosse passes around or over the goal and allow players to make last-second shots while falling. Goalies have an incredibly in-depth control system, so learning controls is the first step to becoming a great Goalie.

Here are all the controls for Goalies in NHL 23 in the image below:

Once the controls are down, moving as the Goalie is the most important thing to learn. The Goalie box, or the crease, is pretty small but has enough room for you to protect the goal from all angles. Once an attacker skates toward you, getting ready for a goal, you will want to position yourself in front of the attacker to prevent an open shot at the goal.

Many times, you will face multiple players positioned to take shots. To defend them all, you will want to follow the puck and track any open attackers. If a pass is made, you can quickly move to the other side of the goal using the Hug Goal moves or Slide moves. Here is how to quickly snap between the posts of the goal:

How to block goals in NHL 23

There are many ways to attempt to block goals in NHL 23, but deciding what controls to use for each defending scenario can be very tricky. There are a few things to look out for when defending a shot that will help you make the right movements to block the puck.

First, you must know what areas of the goal you are leaving open during the shot. There are five holes in the Goalie's defense when in a ready position. When an opponent takes a shot, you must determine which holes to defend by moving either your entire body or your stick and glove.

How to defend against high and low shots in NHL 23

Your glove will automatically move to shots close to you for high shots, so ensure you are in the right position. You can often hug one side of the goalpost to block a high shot to cut off angles for the shot.

For low shots, there are a few ways to ensure you block the shot. It is important to know that in a normal stance, the five-hole is right between your legs and is exposed. When blocking low shots, performing a butterfly will close the five-hole and prevent the puck from sliding under you.

To butterfly, press and hold R2 (PlayStation) or RT (Xbox). You can also stack your pads to wall up your defense on one side by holding Circle (PlayStation) or B (Xbox) and moving the left stick in the direction you want to defend.

Determining where a shot will go takes some practice and hockey IQ. When you see an attacker getting ready to shoot, first look at the shot location meter to see what areas are open. Next, look at how their stick is moving to determine if it is a slap shot or another motion. Finally, make your move to block the shot, and do not get discouraged if you give up a couple of goals while getting the hang of it.

For more on NHL 23, check out All NHL 23 Loyalty Rewards and how to claim them on Pro Game Guides.

Goalie Tips and Tricks in NHL 23