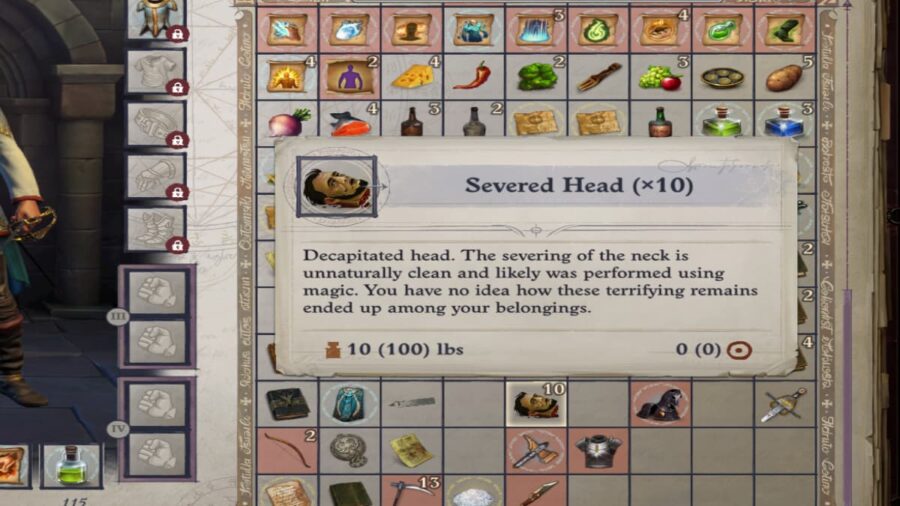 If you have ever rested at the Defenders Heart Inn or at your camp, you may have noticed a certain item appearing nearly every time in your inventory. The item is severed heads, and occasionally you can find them in your inventory, and where they came from is unknown.

The heads seem to appear every time you rest and don't seem to stop appearing. In fact, we have ten so far in our game. But, If you are just starting the game and only just noticed the severed heads, you won't learn where these severed heads are from and what they are for until later on in the game.

Related: How to inspect enemies in Pathfinder: Wrath of the Righteous?

You will eventually figure out their origin, and it is truly shocking. Disclaimer: If you do not want major story spoilers, stop looking for the severed heads in Pathfinder now! That said, severed heads are closely tied to a major secret and quest regarding one of your companions. If you are keen, you can catch small little hints about it from various NPCs in the game.

But again, stop looking the heads up and enjoy the game and wait until they get revealed. Major spoilers suck, and this one is a juicy and huge one you won't want spoiled.

In the meantime, simply throw the heads in your personal chest or only save one and drop the rest until you come across the eventual quest these heads are tied to. This will save storage space and help you not carry a thousand heads around.

Check out our other Pathfinder guides for more help with the Pathfinder series!