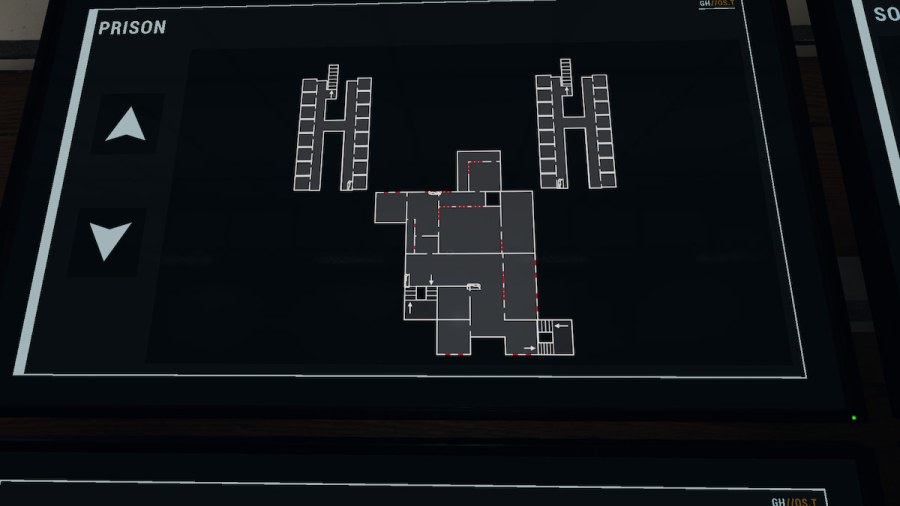 The Prison is a Medium sized map in Phasmophobia. It can be intimidating for players that have only played in the houses of the game, but is easy to learn because of how the map loops. While players can hide behind certain furniture to try to loop around Ghosts, there are static hiding spots that will serve players much better. With the map looping around, any of these hiding spots can prove to be useful when being Hunted. These are all the hiding spots for the Prison in Phasmophobia.

Where to find each hiding spot in the Prison in Phasmophobia

There are five main hiding spots that are located in the Prison. These hiding spots won't help players when being Hunted by a Deogen, but they will be useful against every other Ghost. There are two on the ground floor and three upstairs that can be used. Many Ghosts will wander into rooms quickly and can explore the room as a quick check or just enter the room and leave if they don't immediately see someone. Many cells are thought to be safe to hide from the Ghost but that is only because the Ghost's pattern may not always open every single cell.

The Ground Floor Lockers of the Prison

Right at the entrance of the Prison, just past the rows of chairs, are a pair of two lockers. These lockers are the main hiding spot to go if the Ghost Room is near the entrance, side rooms, and evidence lockers, or in the office rooms upstairs.

The Trash Cans in the Cafeteria of the Prison

If a Ghost is found in either Cell Block or anywhere deeper into the Prison, the cafeteria will be the players' safe haven. A set of trash cans on the left of the cafeteria will be placed in a way for players to hide. Players should make sure they aren't peaking out as much as possible so the Ghost doesn't spot them.

Related: How to identify a Myling in Phasmophobia – All Evidence and Tips

The Bathroom Stalls on the Second Floor of the Prison

The sets of stalls in the bathroom of the Prison are located upstairs. These are useful when hiding from Ghosts that spawn in any of the offices or evidence rooms on the ground floor.

The Second Floor Lockers in the Prison

On the second floor of the Prison, towards the Warden's Office is the infirmary. At the end of the room is a pair of lockers that players can hide in. This is perfect for hiding against Ghosts that spawn in the infirmary, Warden's Office, or server room.

The Second Floor Trash Cans in the Prison

Beside the infirmary, around the same location as the Warden's Office is the watch tower. This oversees the other parts of the Prison and has a set of trash cans that can be hidden behind.

For more Phasmophobia guides, check out How to identify a Shade in Phasmophobia – All Evidence and Tips on Pro Game Guides.

All hiding spots for the Prison in Phasmophobia