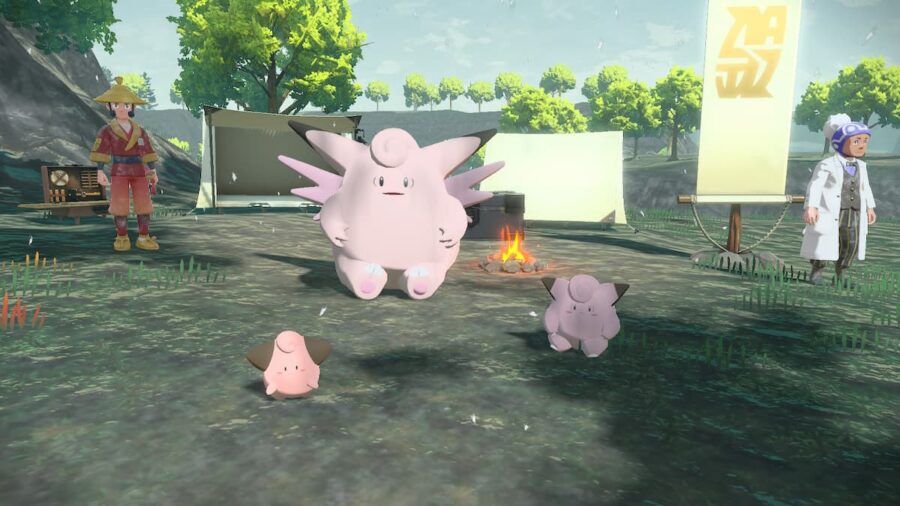 Clefable's best moves in Pokémon Legends: Arceus are Draining Kiss, Dazzling Gleam, Play Rough, and Moonblast. We picked these moves based on Clefable's base stats and the STAB (same type attack bonus). This bonus yields a 50 percent increase in damage output if the chosen move shares the Pokémon's typing.

Dazzling Gleam is another special fairy-type move with an impressive maximum power of 120, but it is not learned naturally. You must purchase this move from Zisu at the Training Grounds in Jubilife Village, but it provides another powerful option to capitalize on Clefable's power. Unlike the others, Play Rough, another fairy-type move, is physical and must also be learned from Zisu. However, its high attack of 135 is a valuable option if you want this fairy Pokémon to be formidable.

This means special physical attacks rather than physical attacks will always be Clefable's forte in Pokémon Legends: Arceus. Many other powerful moves such as Hyper Beam or Giga Impact can also be learned from Zisu, but they require an entire turn to recharge and would worsen an already below-average speed stat. They also do not take full advantage of the STEM.

Clefable's final learned move, Double-Edge, could be a good alternative to have in your arsenal instead of Draining Kiss, but it is a physical normal-type move strengthened neither by STAB nor by Clefable's dismal attack stat. After all, Clefable's most impressive stat is its special attack. Without Draining Kiss, you won't be able to steal a significant amount of health from your opponents in the heat of battle—an extremely useful capability.

Clefable is the third and final evolutionary form of Cleffa, which evolves into Clefairy. Players can find all three at the Fabled Spring in the southwest of the Coronet Highlands, including an Alpha Clefable. Clefairy's power is average for non-legendary Pokémon and would be a great choice to strengthen your party while building out your Pokédex. Be sure to also take advantage of its best nature, which adds a further 10 percent attack increase.