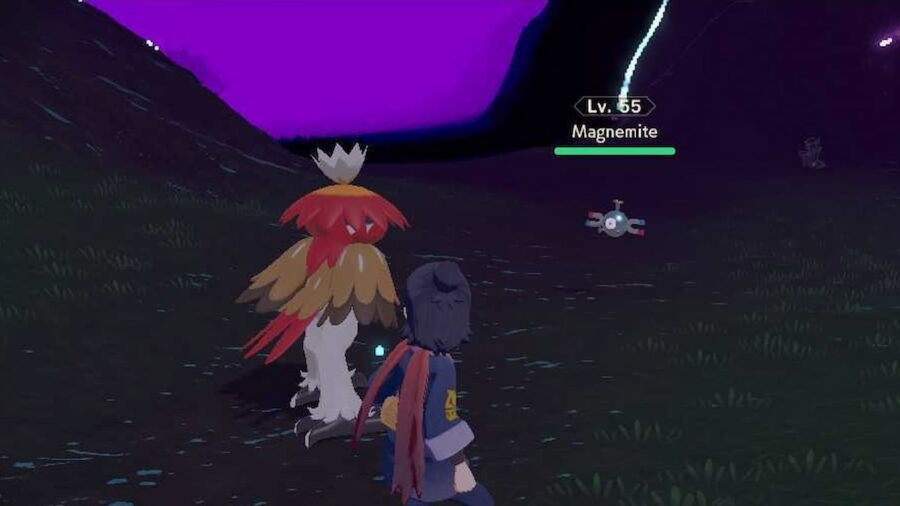 Magnemite is an Electric/Steel-type Pokémon that evolves into Magneton, one of the most powerful Electric types in the game. Although it’s local to Sinnoh in Diamond and Pearl, it seems nowhere to be found in Hisui…or so you think.

Magnemites can actually be found within Distortions on Cobalt Coastlands. They’re quite common, so you’ll definitely see a couple when one forms. Magnemite isn’t super sensitive, so you can simply approach them while crouched.

If you want to spawn Distortions quickly, capture a bunch of Pokémon in the area. The expedition activity will hasten its formation. In fact, you can visit Cobalt Coastlands during an outbreak just to speed things up. After you’ve captured the Pokémon, wait for a few minutes. A Distortion should start forming.

Resting in your camp on an option other than “just for a while” will reset the Distortions’ formation process. Don’t do it.

The Magnemites that you capture in Distortions are high-leveled enough for them to evolve to Magneton when captured. However, if you want to evolve them to Magnezone, you need to take your Magneton to Coronet Highlands. The electromagnetic field in the area will allow them to evolve.

In fact, you can capture Magnezones flying around in the Highlands. You’ll need a Jet Ball, though, since they’re far off the ground.

Where to find Magnemite in Pokémon Legends: Arceus