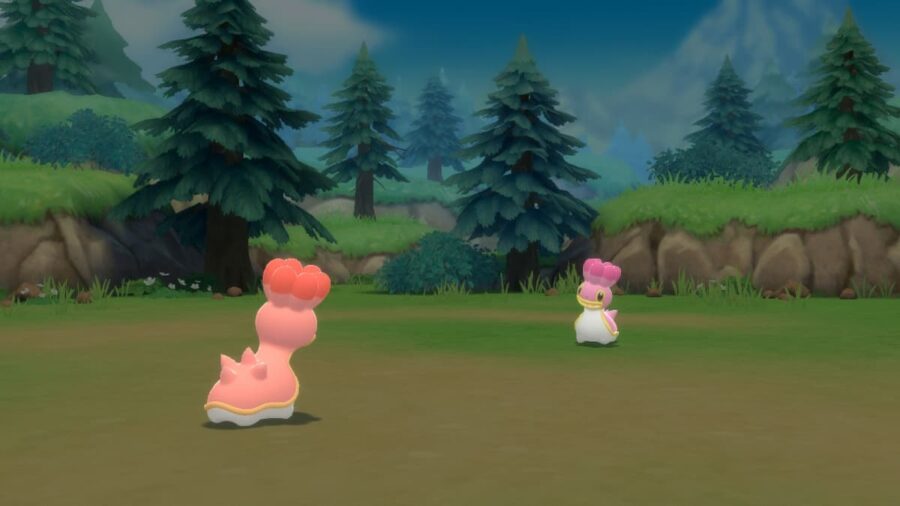 There has always been a lot of value placed on rare Pokémon, and Brilliant Diamond and Shining Pearl is no exception. In fact, shiny Pokémon, or recolored Pokémon which you only have a one in 4,096 chance of encountering without odd manipulation, that can be found in the Sinnoh region are arguably some of the prettiest you can find.

Rapidash with normal-colored flames is boring to look at, but its shiny version, which has pale purple flames, looks majestic and ghastly. You can shiny hunt Ponyta, its pre-evolved form, in Route 206, Route 210 (South), and Route 215.

Here’s another Pokémon whose aura changes when you catch its Shiny form: Cherrim. In its overcast or regular form, non-shiny Cherrim is bright purple. However, its Shiny version arguably more accurately exudes the “overcast” in its name.

Related: What are the Shiny Odds in Pokémon Brilliant Diamond and Shining Pearl?

The best way to shiny hunt Cherubi, its pre-evolved form, is through Honey Trees or in the Grand Underground.

When you first see its design it’s easy to mistake regular Gliscor for a Flying/Poison type, but now you can mistake it for a Flying/Ice type due to a rather cool shiny recolor. You can only shiny hunt for Gligar, its pre-evolved form, in Brilliant Diamond’s Grand Underground. Check the Grassland Caves, Swampy Caves, Sunlit Cavern, Big Bluff Cavern, and Bogsunk Cavern.

Let's face it: regular Metagross looks like a fragile Rock-type. Shiny Metagross is much more reflective of its Steel-typing. You can shiny hunt for Beldum, its pre-evolved form, in the Grand Underground after you've received the National Pokédex. It's rare, but it sometimes appears in Rocky Caves, Whiteout Caves, the Icy Cave, Big Bluff Cavern, and Glacial Cavern.

Shiny and non-shiny Yanma is just a simple red to blue palette swap. However, when it evolves into Yanmega, it looks completely different—like a dragonfly exploring at night.

You can shiny hunt for Yanma in the Safari in Pastoria City after receiving the National Pokédex. It's one of the Special Pokémon that shuffles daily, so be sure to look at the binoculars on the second-floor lobby to see which Pokémon will be available for the day.

Related: How to get the Shiny Charm in Pokémon Brilliant Diamond and Shining Pearl

You can shiny hunt Uxie by flying to Lake Acuity post endgame and entering the cavern in the middle. Save before you encounter Uxie. Talk to it, and if it isn’t a shiny, soft reset until Arceus shows mercy.

Cresselia is a well-known Psychic legendary, and its Shiny form better reflects that. Shiny Cresselia gives up the whole Fairy-type pink vibe for a space-themed blue and yellow one—fitting for a legendary of a game that has Team Galactic as the enemy.

To shiny hunt Cresselia, follow these steps to find her. Much like Uxie, you’re going to need a lot of luck, so save before you encounter her for the first time.

Cresselia isn’t the only legendary who looks and feels different with one of its colors swapped for blue and yellow (or peach if you want to get strict). Giratina definitely looks like less of a Ghost-type than the original but the Shiny recolor oddly fits it better. You can find Giratina using this guide. Save and pray to Almighty Sinnoh after.