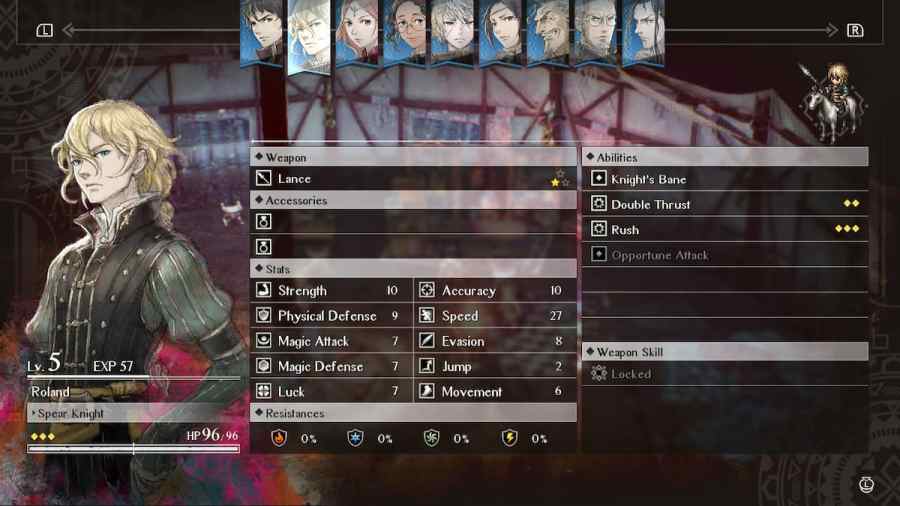 Roland Glenbrook is an indispensable unit on the battlefields of Triangle Strategy. He has an unparalleled range from the back of his white steed, and his abilities as a Spear Knight allow him to attack multiple foes at once—vital early in the game. You'll need to employ strategies where his positioning will allow him to do so.

Roland's default ability, Double Thrust, is a more powerful version of his regular physical attack but costs 2 TP (Turn Points). At level four, the ability Rush will allow Roland to charge through four consecutive squares, dealing damage to any three enemy units in his way.

This move will be among Roland's best early in the game. Even if the cost is a hefty three TP, the ability to attack multiple targets will be a boon to you. And Opportune Attack learned at level seven, will allow Roland to attack adjacent enemies when he moves five squares or more—perfect for horseback.

Plot Roland's positioning carefully since you can damage and knock enemy units back three squares with the ability Pushback at level ten. When you reach level 15, the ability Flash of Steel will deal significant damage to any five foes in a straight line.

It may be tempting to charge Roland into the thick of battle from the get-go, even if his moving range lets you. But if he's not strong enough, he'll fall. Triangle Strategy rewards players who take their time to orchestrate coordinated attacks with allies, so going it alone is never wise.

Roland Glenbrook's class default is Spear Knight, but he can be promoted to Cavalryman with one Medal of Bravery at level ten. At level 20, he may be promoted to Master Cavalryman with a Medal of Valor. At this Elite class, Roland gains the passive ability Spring in Your Step, which increases his Movement by one in clear weather.

Upgrade Roland to Weapon Rank Two to decrease the TP costs of Rush and Double Thrust by one, as well as increase the damage dealt by critical hits. Weapon Rank Three can further raise Roland's Luck by three points, which increase the chances of critical hits. His last ability learned, Four Dragons, ignores a single enemy's defense while inflicting physical damage. Use Roland's strengths strategically, and the rewards will be great.

How to use Roland Glenbrook – Triangle Strategy Unit Guide