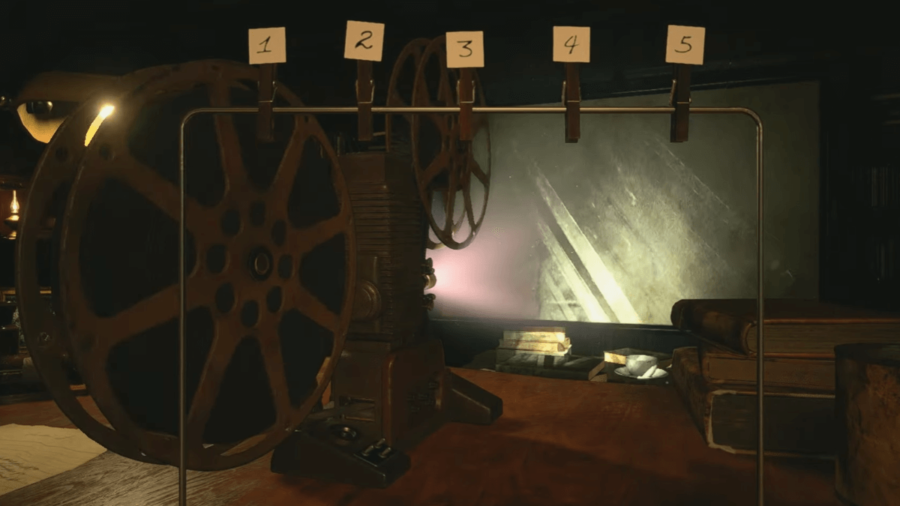 There are puzzles abound in Resident Evil Village, specifically within the deep depths of House Beneviento. One of these puzzles involves five film strips within the Study. In order to open the secret door within the Study, players must find the missing film strip and place them all in the correct film puzzle order. Only then can players move forward.

To find the missing film strip, players must first obtain the Tweezers, which can be done by completing the Music Box puzzle. Once players have the Tweezers, they should head back to the main room with the familiar-looking mannequin on the table. Examine and open the mannequin's mouth using the Tweezers. Now, players will have the film strip in their possession.

With film strip in hand, players should run back to the Study, which houses a film projector and additional bookcases lining the wall. The player's objective is to open the secret door hidden behind one of the bookcases. To do this, players should use the missing film strip and sequence all five in the correct film puzzle order.

Related: How to escape the Baby Monster in Resident Evil Village

Check out the picture below for the correct order.

Players can use the hint on the table to decipher the correct film puzzle order, or they can reference this list below:

With the correct film puzzle order, press Play Movie. The film will play before the projector falls and reveals the hidden door. Step inside to retrieve the Scissors. Crouch down to use these Scissors on the tape to reveal an additional secret hallway that leads to a room players will access later, along with another door that leads to the lab room. The Scissors must also be used on the mannequin to progress this mission.