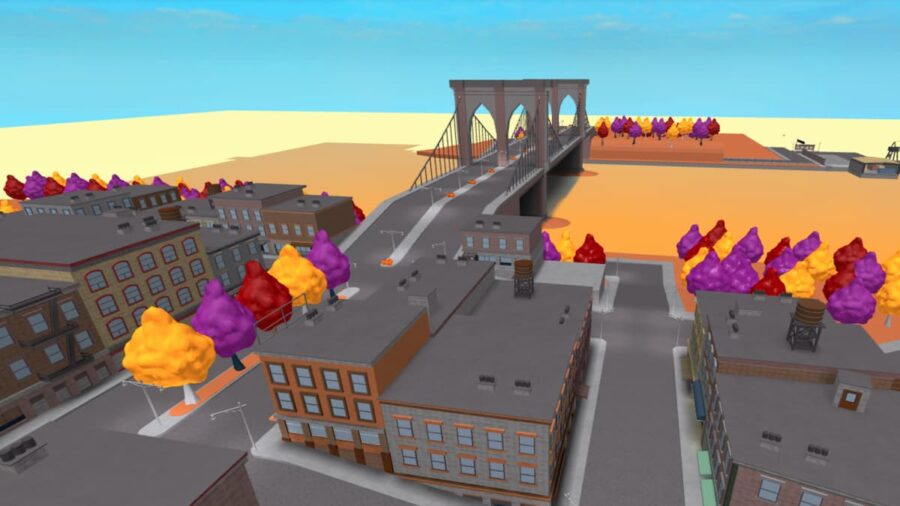 Training areas in Super Power Training Simulator are helpful spots at which you can rapidly increase your stats. While the City Port area is unlocked during the first few quests with Sath, other areas require skills like flying or teleportation in order to access them.

Body toughness (BT) is the first stat that you'll encounter a training area for. Increasing BT involves bathing in different liquids. Each liquid requires a minimum BT, or it will result in a massive amount of damage. While training BT, you can simultaneously train all other skills.

City Port is the first training area that you unlock in the game. Head over the bridge and you will find a building with a staircase leading up to the second floor. Enter the door and you'll find a room that features an ice bath and a fire tub. The ice bath unlocks at 100 BT with a x5 multiplier, and the fire tub unlocks at 10K BT with a x10 multiplier.

The Iceberg is found to the southwest of Sath, out on the water. Once you have at least 5K BT, you can train. But you can train for longer if you wait until you have 100K BT. The Iceberg gives you a x20 multiplier.

Once you have at least 50K BT, you can access the Tornado to begin training, though it requires 1M BT to train for longer periods without dying. Find the Tornado by going straight past the leaderboards and running onto the water. The Tornado gives you a base multiplier of x50 BT.

Like the fire tub in City Port, the Volcano requires your character to bathe in lava in order to gain BT. To begin training, you need at least 500K BT for a multiplier of x100, though you'll need at least 10M BT to survive for a substantial amount of time. Access the Volcano by leaving the safe zone and heading into the water in a northeast direction.

Fist Strength (FS) is one of the most straightforward skills. As a result, it is one of the first skills you'll unlock in the game. All you need to do is punch! Aside from the Rock, all other training areas for Fist Strength require the ability to fly.

The Rock is right next to the safe zone, where you spawn for the first time when you play the game. It gives a x10 base multiplier.

Go to the Tornado, then fly upward. The Crystal is directly above the Tornado. Once here, you can train with a x100 multiplier. There is no requirement to use the Crystal beyond the ability to fly.

Once you have 1B FS, you can proceed to the Blue God Star training area for a x2K multiplier. Fly into space and go to the same level as the Floating Zen Temple, and you'll find the star.

The easiest way to get to the Green God Star is by running to the Iceberg (southwest of Sath) and then flying upward. It requires 100B FS and gives a multiplier of x40K.

The final training area you unlock for FS is the Red God Star, which can be found by going to the center of the game's map and flying straight up. The Red God Star is extremely high up, so just keep going until you hit it. In order to train, you'll need at least 10T FS, but you'll also receive a multiplier of x800K.

Psychic Power (PP) is different from both Body Toughness and Fist Strength in that there's only one distinct training area for the skill. Once you can fly, you can head to the Zen Temple by flying over the clouds and heading between the Volcano and the Crystal.

The Zen Temple has four separate areas that unlock as you gain PP. When in the Zen Temple, you will not gain Psychic Power as you fly. You also need to make sure that you meet the minimum skill requirements before utilizing any of these areas, as going into them too early will result in half damage to your HP regardless of your BT score.

The First Lawn is well-named because it is, in fact, the first area that you will unlock in order to train. It can be found to the right of the Waterfall and requires a base of 1M PP. The First Lawn gives a multiplier of x100.

Related: How to get Tokens fast in Roblox Super Power Training Simulator

Before you can train in the Waterfall, you'll head to the top of the falls and find a bridge that connects both sides of the Zen Temple. In order to train here, you need 1T PP and will receive a multiplier of x1M.

The training area at the Waterfall is small but provides the highest PP multiplier in the game (x100M). To train at the waterfall, stand at the base of the falls. Nowhere else on the waterfall will provide training. The Waterfall requires 1Qa PP to train.

While these are the main training areas for Body Toughness, Fist Strength, and Psychic Power, there are other hidden easter eggs and discoverable areas scattered throughout the map that are worth exploring in between taking down opponents. Keep in mind that both Movement Speed and Jump Force do not have specific training areas, so it's worth using the weights to boost your skill gain in those areas whenever possible.

Looking for more Roblox content on Pro Game Guides? Check out How to unlock Neon Space Whale in Roblox Adopt Me!.