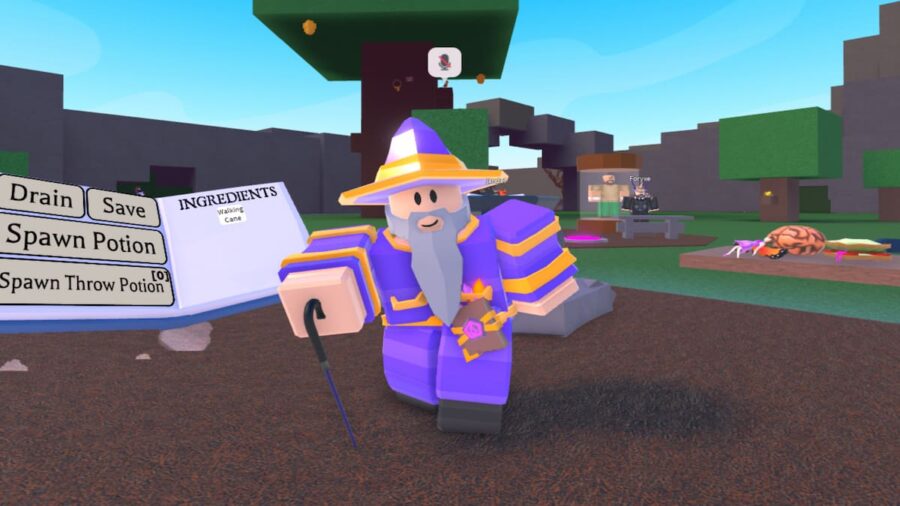 Wacky Wednesdays are back in full swing, with the newest update released on Wednesday, Nov. 17, 2021! This update, titled Old, has not only brought new potions to Wacky Wizards, but it's also brought two new ingredients—one free and one premium. In the quick guide, we'll be going over how to get the new free ingredient, the Walking Cane.

The first step in obtaining the Walking Cane is creating a fire potion—you can do this by adding the chili ingredient to your cauldron and pressing the spawn potion. Once you've done this, bring the potion to Oz's Cave, located near the Goblin Village. You'll see a hole in the wall covered by tall, green bushes that you can walk through.

In Oz's Cave, near his house, you'll see a bush on the ground with a flammable icon over it. Click this bush to set it on fire using your fire potion. This will burn the bush and reveal a small hole in the ground.

Now, head back to your cauldron, drain it, toss in a piece of dynamite, and press spawn potion. After it has appeared, grab the explosive potion and run back to Oz's Cave. Hop down into the hole that you revealed by burning the bush, run-up to the locked door, and drink the potion in front of it. Your character will explode and break down the door in the process.

The final potion that you'll need to create is the Oz potion. To do this, locate both Foryxe and Jandels' heads and throw them into your drained cauldron. Foryxe's head can be found on the shelf in the Club Cave, while you can find Jandel's head behind a cactus in the desert.

Related: How to get Manu ingredient in Roblox Wacky Wizards?

After you've added both ingredients to your cauldron, spawn the Oz potion and drink it. To walk through the door you blew up and into the next room, you'll need to trick the avatar scanner into thinking that you're Oz! The scanner can be found at the end of the hallway, past the exploded door.

After you've walked through the scanner, head to the table covered in papers and look for Oz's wallet. Once you've found it, pick it up and bring it back to Oz. Upon doing so, he will thank you for your help and award you with the Walking Cane ingredient!

The Walking Cane ingredient on its own can be used to make the Old potion, which makes your avatar very slow, hunched over, and all-round old!