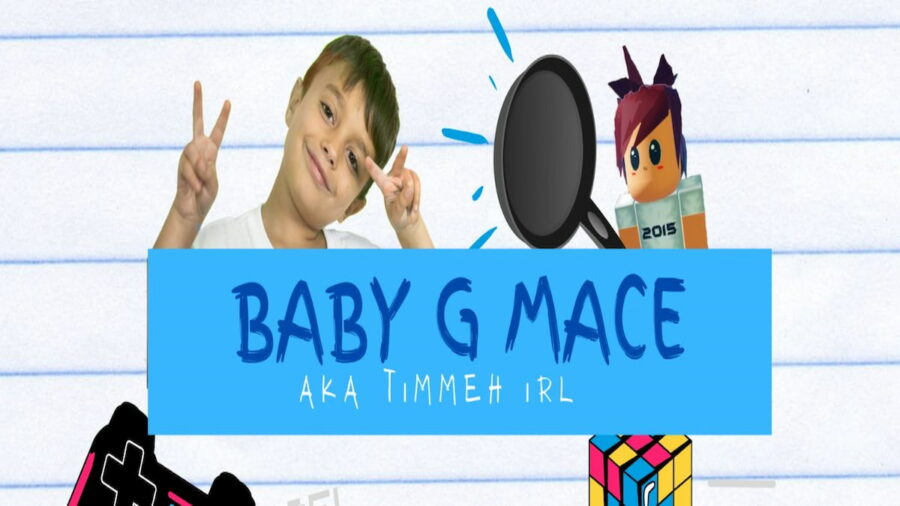 At only six years old, BabyGMace is one of the youngest and fastest growing content creators in the Roblox community. With the help of his mom, this up-and-coming star has not only managed to secure himself current collaborations with popular YouTubers, such as KreekCraft and Dexter Playz, he's also paved the way for even bigger projects in the near future. Most recently, BabyGMace released a song featuring Dexter Playz that's quickly on the way to reaching 7,500 YouTube views.

This song, titled "Roblox Voice Chat Song," was released on April 3, 2022, and, as the name implies, highlights BabyGMace's thoughts on Roblox's newly implemented voice chat feature. In this song, BabyGMace jokingly encourages his younger viewers to use their parent's ID to register for voice chat, as Roblox requires all voice chat users to be at least 13 years of age—six years younger than BabyGMace himself. Though the song does have a catchy chorus on its own, and is produced by famed Roblox producer BSlick, it's the feature from one of BabyGMace's favorite creators, Dexter Playz, that truly makes it stand out.

"Working with Dexter is awesome," said BabyGMace. "I was so excited because when I wrote 'Roblox Voice Chat Song,' I knew that he had to be in it. He’s been my greatest supporter."

Beyond making music, BabyGMace also dabbles in acting and enjoys creating and starring in his own short skits. Since starting his YouTube channel in March of 2021, BabyGMace has upheld his commitment to playing the role of Timmeh, a fictional character created by KreekCraft who's main goal is to constantly pester the YouTuber for free Robux. KreekCraft himself has even acknowledged these videos, reposting them on his personal YouTube channel and saying that BabyGMace "plays the perfect real-life Timmeh." Using this success, BabyGMace hopes to continue growing his working relationship, and friendship, with KreekCraft in the future.

"When Kreekcraft first reacted to my one of my videos, I went crazy," said BabyGMace. "He’s such a good YouTuber, and I hope to work on something huge with him. Maybe soon!"

As BabyGMace continues to grow, so do the scope of his projects. With multiple songs in the works, including a planned collab with the creator of one of the biggest experiences on Roblox, the six-year-old is beyond ready to make a name for himself in the Roblox community.

"Stay tuned for even more songs—the one that I’m making right now is insanely good," said BabyGMace. "[I have] projects with epic creators [coming soon], like maybe even a developer whose game rhymes with jiggy! One day I’m gonna do something with Mr. Beast, I just know it. I’m only six [right now], but imagine when I’m like...ten!"

Hoping to follow in the footsteps of YouTubers like Dream and PrestonPlayz, BabyGMace found his love for YouTube at a young age (even younger than he is now), pursued it wholeheartedly, and has been producing content ever since.

"I've asked my mom to be a YouTuber everyday since I was three," said BabyGMace. "It’s always been my dream. I get to bring my craziest ideas to life in videos and I love it! Plus, I get to make cool friends like other YouTubers and people from all over the world."

Due to his age, however, BabyGMace leaves the managerial side of his career to his mom, who loves seeing her son blossom behind the camera.

"It's kind of crazy seeing his channel grow like this while he’s in kindergarten, but it’s been great," said BabyGMace's mom. "Helping him interact [with fans] on twitter is hysterical, half the time he asks me to respond with a potato [emoji]. He doesn’t say fans himself, though—to him they're just hundreds and thousands of views from friends. His community is a ton of great kids who are all supportive of one another. It’s great to see."

Even with all of these changes, however, both large and small, BabyGMace remains grounded, keeping his friends close and his family even closer. He's found enjoyment in new endeavors and continues to prove that he has a true passion for what he does.

"It’s funny," said BabyGMace's mom when asked about what's changed in her relationship with her son since starting his YouTube channel. "Instead of playing with Dino action figures, it’s laughing for hours creating ideas or filming. We still have a lot of fun. I suppose most six year olds aren’t watching videos about copyright laws or Vidcon replays, but we support it as long as he’s enjoying and learning."

With ambitious and exciting projects lined up for the future, the path ahead for BabyGMace is undeniably bright. As a kindergartener, he's achieved feats that creators three times his age can only hope to fulfill and has no plans of slowing down. In a time when Roblox's Metaverse is constantly changing, bringing in new features, collaborations, and visions, BabyGMace remains a refreshing piece of innocently-hilarious simplicity.

Looking for more Roblox content? Be sure to check out the Roblox section of Pro Game Guides often for more guides, news articles, and feature stories like this one!