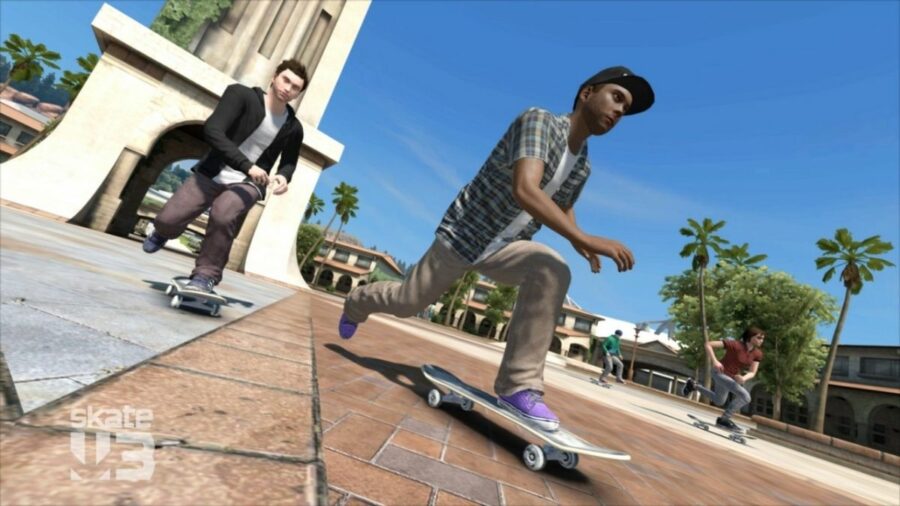 Even 11 years on Skate 3's influence seems endless. YouTubers are still regularly posting the likes of epic challenges and testing where they can up the level in terms of tricks and spots within the map (or sometimes outside the map due to glitches).

A number of these achievements do require a little extra help from the likes of cheats etc. So, here are the cheat codes you need to know for hitting unbelievable lines and spots in Skate 3. As well as codes, there are also glitches and unlockables, which we will include below the cheats list.

To input the cheat codes, you will need to go to Main Menu > Extras > Enter Cheat Code. Once you are on the cheat screen, enter any of these codes (multiple can be in effect at once).

— Mcfly: Makes your trucks and wheels disappear, so it looks like a hoverboard

— Miniskaters: Makes your skater really small (but strangely with big hands and feet)

— streetsweeper: Resets all moveable objects to their original positions

—  Zombie: Turn non-skaters into zombies (also changes the hue, so the sky is orange)

Related: How to Manual in Skate 3

— Insane Speed Glitch: For this, you will need to be standing backwards from the direction you want to speed off in and have ditched your board (i.e., not be holding it or stood on it). Press X on Xbox or Square on PlayStation to jump, then Press RB at the peak of your skater's jump, and after that, Press Y on Xbox or Triangle on PlayStation.

Don't be surprised if this doesn't work first try as it is very fiddly. If you press Y/Triangle too early, your skater will just hop on your board, and if it's too late, they will bail on the floor. It is notoriously tricky, so don't get disheartened!

— Super Jump: Make sure you are stood on flat ground and in Goofy Stance (feet facing the left side of the screen), then do a FS 360 Pop Shuvit (if you do a regular, non-FS 360 Pop Shuvit it will not work). When in the air, tap either R2 or L2 and just before you hit the ground, hit Y on Xbox or Triangle on PlayStation. Once again, this can take a few tries, so you will have to practice it a bit before launching off correctly.

We have included unlockables in this list as these are not obtained via cheat codes, and cannot be made available unless you complete certain parts of the game. No cheaty cheaty in this section!

— Coach Frank: Complete all of the Skate School Tutorials to unlock Coach Frank as a playable character

— Dem Bones: Complete all of the Death Races to unlock the skeleton as a playable character

— Meat Man: Complete all of the Hall of Meat challenges to unlock a raw steak as a playable character

With these at your disposal, you should be able to do an insane speed glitch as a skeleton on a hoverboard! So, go and have fun with it!

Need more tips for your skating career? Here's how to handplant in Skate 3.