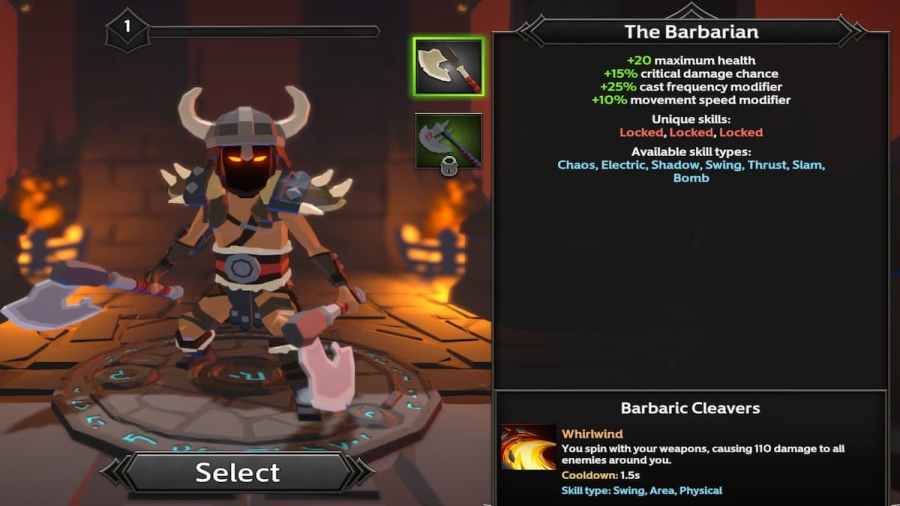 The Barbarian is a melee class that can focus on movement and attack speed or being a bulky tank. Either playstyle suits the Barbarian, or you can play a combination. We recommend selecting skills directly in front of the Barbarian or those that hit around it. Here are our recommendations for the best builds for the Barbarian in Soulstone Survivors.

The skills you want most want to focus on are strong attacking skills that hit enemies close to the Barbarian and fall into the Swing, Thrust, and Slam categories. We don't recommend picking up skills that hit at a distance. Passive skills that give you a chance to inflict a damaging status effect are also good on the Barbarian. Here are the best skills for the Barbarian in Soulstone Survivors.

One thing to note when selecting your abilities is that Quick Strike, Titan Cleaver, and Body Slam's damage are affected by your maximum movement speed, armor power, and health. So you should choose these based on what stat you are focusing on. Bloodlust is a must, as it increases your potency for a brief moment.

Other than that, we recommend picking up the suggested passive skills and then choosing your remaining active skills based on which you like the sound more. We suggest choosing a mix of frontal skills and those that hit in all directions for maximum damage coverage.

The Barbarian is a melee build specialist, so you will want to focus on stats that increase its longevity and ability to get close to enemies or retreat from danger. Here are the best stats we suggest focusing on when playing the Barbarian in Soulstone Survivors.

Focusing on Critical Chance, Critical Damage Modifier, Area Modifier, and Movement Speed allow you to become a fast-moving whirling dervish of destruction. Building on your critical stats, especially if you can get Vicious Strikes, lets you deal massive amounts of damage in a single blow.

The Barbarian's starting weapon, Barbaric Cleaver, is currently the best weapon for this character. It lets you start with the Whirlwind skill, which doesn't have the best damage but does have a fast cast frequency. It also hits enemies all around you, letting you effectively damage enemies in all directions.

That being said, the Tribal War Axes are also a good choice, as the Double Slash skill is also good. This applies the bleed effect, which can deal damage over time but has a slower cast frequency and only strikes enemies in front of you.