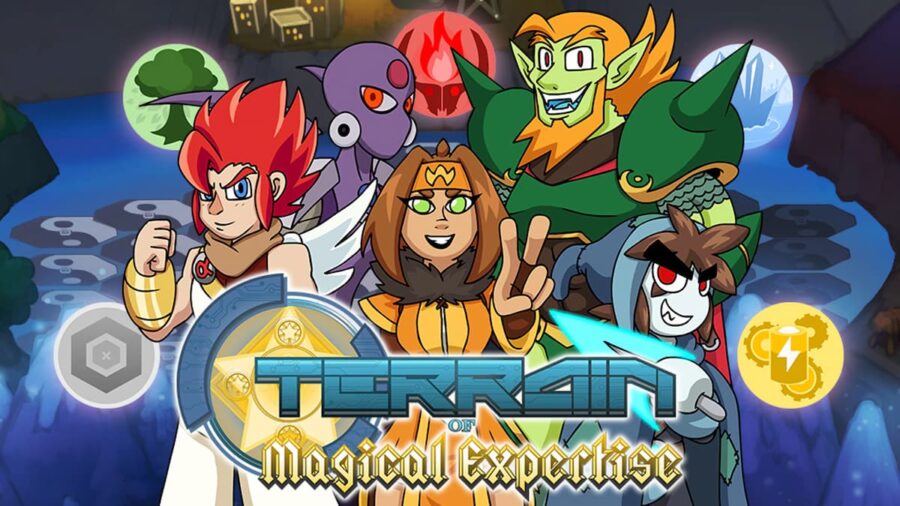 Terrain of Magical Expertise is a throwback to when flash games and animations were the hit thing. It blends flash animation and the classic JRPG to create something unique. Fans may recognize the name from TOME, an animated series based on the same world and characters as this game is set in an alternate timeline. It blends aspects of many different games into one to create something charming and entertaining.

Terrain of Magical Expertise places you within the in-game game of the same name. You take the role of the White Hat Hacker who must find the Black Hat Hackers (the bad guys), decipher why they are ruining the game for others, and stop them. You are joined by the Dandy Alliance and together completes in-game quests. Your new friends bring much-needed combat abilities as well as the ultimate power of friendship. As you progress through the story, you will unlock power-ups to increase your stats as well as powerful special attacks to increase your arsenal in combat.

The best part of Terrain of Magical Expertise is its endearing world and engaging battle system. Typical JRPG combat is given new life through a quick-time-event system similar to Paper Mario. You have a variety of moves that each require a special input to deal their full effect. Each character has an element and as a result, weaknesses and strengths against other elements. When it comes to boss fights, the game becomes a real challenge. When you cross paths with another "player" in the game, a Pokémon style showdown begins. Each character is voiced and has personality making them feel real. Even when defeated, NPC enemies turn into adorable ghosts.

As fun and exciting as the combat is, it has a major flaw. Defeating enemies rewards no experience points. As a result, there is no level-up system. The closest things are power-ups which are gear which when equipped boosts stats and learning special attacks at dojos in town. The only reward for combat is money. Money that purchases items used in combat, so skipping combat altogether is the better option. Game mechanics are sometimes explained after you've already used them which is frustrating.

For all the game's charm, you cannot customize your avatar's appearance. After selecting a class type, your character brushes past the narrator talking about the thousands of options to create your avatar. While the reason for this is story-related, it was a letdown to not create your unique avatar. Fans of the original animated series will be disappointed to know that almost none of the original voice actors return. Lastly, there is no map in the game, and while navigating the world isn't difficult due to teleporters, a map would make traveling clearer.

Terrain of Magical Expertise is a joy to play from start to finish. Its world feels alive especially for a game within a game and the narrative handles this balance well. Fans of the source material will enjoy playing as their favorite characters while new players can experience the delightful world of Terrain of Magical Expertise. Minor issues such as a lack of personalization for the White Hat Hacker, no in-game map, and no incentive to initiate combat do not detract heavily from what is a fantastic experience.

How to use team attacks in Terrain of Magical Expertise

How to learn new special attacks in Terrain of Magical Expertise

What are Power-Ups in Terrain of Magical Expertise

Is there a map in Terrain of Magical Expertise

How to hack in Terrain of Magical Expertise