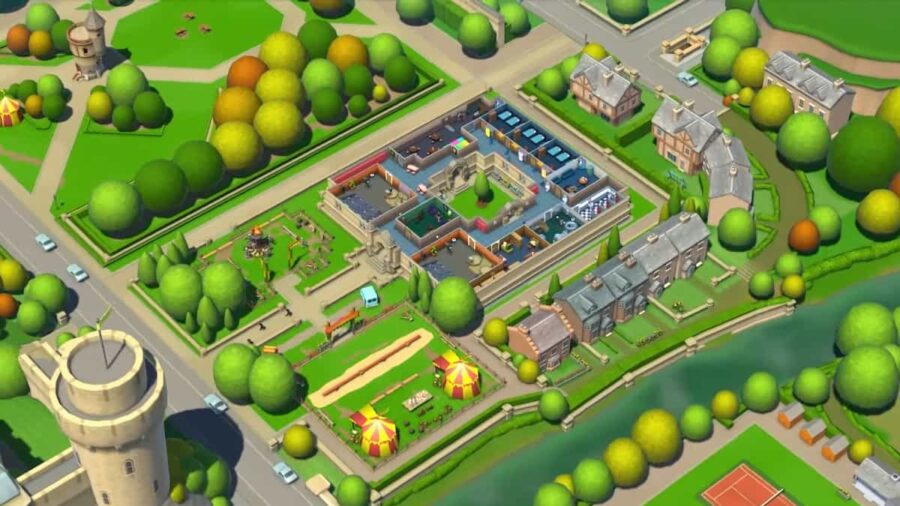 How to use buildings in Two Point Campus

In Two Point Campus, players can construct and place buildings without too many restrictions. Plots are unlocked with various methods, and you can choose to purchase them with existing buildings or completely empty. Players can express their creativity even after choosing existing buildings, as you can always go back and delete or edit structures. Likewise, placing buildings is remarkably similar to creating rooms.

There is an in-game building menu from which players can drag their ideal build and place it on a plot. Some of the options shown in the blog included Battle Ground, Jousting Field, Cheeseball Field, Dig Site, and Campus Building. Players can also edit buildings to make room for others, without having to delete that structure entirely. Changing the layout doesn't require evicting people from their rooms. Instead, players can simply add the extra bit to make more space.

How to design exteriors in Two Point Campus

The outside area in Two Point Campus is also available for players to express their creativity. Campus grounds can be decorated with a massive range of customizable items. These include plants, trees, rocks, fountains, statues, food trucks, and more. Players can also change the colors of almost all the flora to match their Campuses.

Similarly, Landscaping options are also a part of the Creativity Tools in Two Point Campus. Players can use the Path and Terrain tool to design the campus grounds. The Landscaping tool has two modes with the default being Perimeter Mode which simply creates rectangular paths. The other one is Line Mode which can be used to create diagonal paths in combination with Perimeter Mode. Players will get to add Hedges and Fences to demarcate areas around the campus by using the Procedural Tool. You can create amazing mazes and different patterns by using this tool creatively. This not only makes the campus beautiful but also divides the space with proper design.

Is there a Photo Mode in Two Point Campus?

Yes, there is a Photo Mode in Two Point Campus which allows players to take a screenshot of their beautiful design. The Photo Mode features an option to switch all of the UI elements off, which definitely makes it easier to click a pretty picture. The developers highlighted that this is only the beginning of Photo Mode and updates will follow soon after with numerous improvements.

Waiting for Two Point Campus to release? Why not check out Best Simulation Games in Steam Next Fest 2022 to see what other games you can sink your teeth into on Pro Game Guides.

What are the Creativity Tools in Two Point Campus?