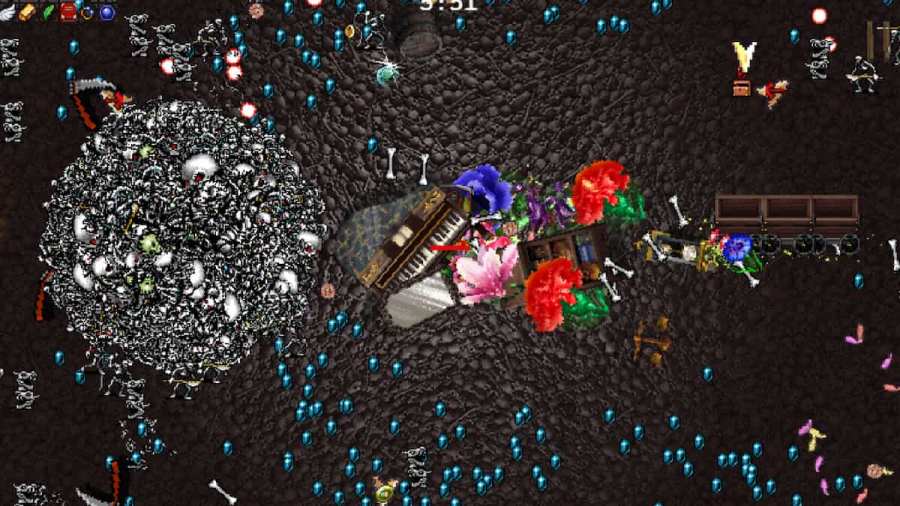 Sketamari, also known as the big ball of bones, has given players much grief in Vampire Survivors. It is a special opponent that appears in the Bone Zone. Sketamari does not appear as an event or in a wave but moves from left to right in the southern part of the map. In this guide, we will explain to you how to defeat it.

How to beat Sketamari in Vampire Survivors

To beat Sketamari in Vampire Survivors, you will need to select a character with high movement speed. Leda is a perfect choice for this. Pugnala is a great character if you don't have Leda because he has powerful guns called Phiera Der Tuphello & Eight The Sparrow as starting weapons. These can be evolved into Phieraggi if you have Tiragisu in your inventory as well. Immediately when you spawn in the Bone Zone, start going down and use the map to locate the question mark. You'll have to be fast because Sketamari grows over time by absorbing enemies into itself.

We recommend the following weapons for this fight:

On the other hand Pentagram and its evolution, Gorgeous Moon, and the pickup item called Rosary do not damage Sketamari so you should not rely on these.

After you start your descent on the map, grab as many blue gems as possible since you will need every level you can get before this fight. If you happen to get Wings as an option, consider taking them. The same goes for Spinach (Might boost) and Empty Tome (Cooldown boost). When reaching Sketamari, position yourself slightly below it. Follow it carefully as it moves left and right.

This is the part where your high movement speed comes into play. The important part of the strategy is not to let Sketamari come close to you. Always make sure you keep your distance from it. Early in the fight, it won't do much damage, but the longer the fight lasts, the bigger it will get. The damage gets progressively higher as well. The first time you defeat Skematari, Scrolls of Morbane will drop from it.

How to defeat Sketamari in Vampire Survivors