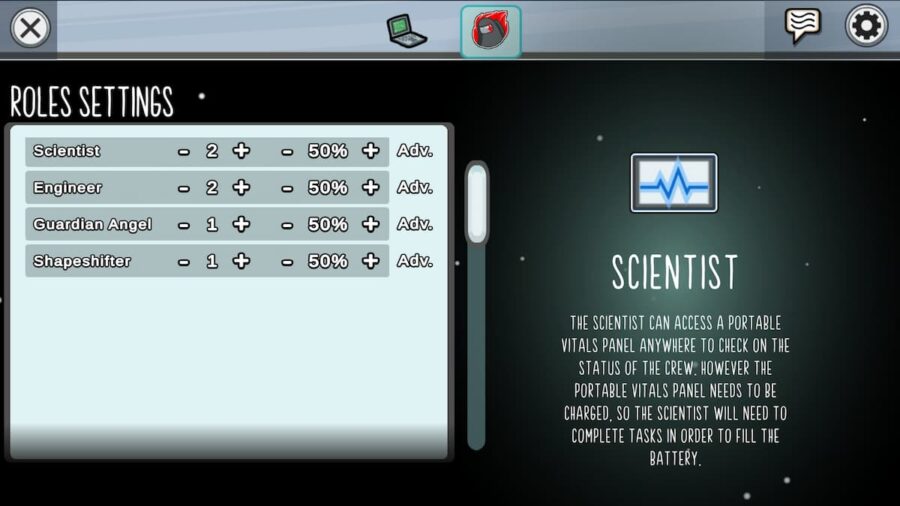 The roles Among Us update added three new Crew Member roles and one new Imposter role. These roles have changed the way you’ll play the game, giving the crew new ways to foil the Imposter, and more tools for the Imposter to kill them right back.

But what are the best Roles settings in Among Us? First, you should understand the two numbers in the Roles Settings section. The first number is the maximum amount of that role. So no matter what, there won’t be more than that in your game.

Related: How to Set Roles in Among Us

The following number, the percentage, is the likelihood of someone being assigned this role. So, for example, if you had the number of Scientists set to two and the percentage set to 50%, each crew member would have a 50% chance of being assigned scientist until the maximum of two is hit.

You can ensure the number of roles is always filled by setting this number to 100%. However, this takes some fun out of the game, as not knowing whether there are Scientists, Engineers, Guardian Angels, or Shapeshifters adds to the mystery.

These settings are ideal for smaller numbers of players. If you have a small group, a Guardian Angel is game-breaking, so it should be avoided entirely. These settings assume just a single Imposter.

With this number of players, you’ll want at least a pair of each role, but the lower spawn rates ensure that there’s always a chance there’s an uneven number. The benefit of these settings? Imposters, especially regular ones, have a chance to pretend to be Engineers and the like if they’re caught venting.

At these numbers, you’ll want to ensure that the majority of players have a role. To do this, you’ll keep the random spawning at 75%. More than one Guardian Angel at any level is difficult to handle. And the mix of Shapeshifter and regular Imposters will help spread fear among the Crewmembers.