We're taking a very detailed look at some strategies on how to catch rare fish in Animal Crossing: New Horizons! There are some specific ways that you increase your odds at catching these fish, and we've got the tips you need to do so. Animal Crossing is unique in that the days play out in real time, so if you don't catch something within the specific time-frame that it spawns in, you could be stuck waiting quite a bit of time to get another chance! This guide should make things a whole lot easier on you if you're desperate to get something quickly.

How to Catch Rare Fish

There's multiple strategies you can employ to catch rare fish in Animal Crossing: New Horizons. Some of them are a bit more by the book, but others can skirt the line into not so fair play. It's up to you to make the distinction of where you draw the line and playing by how the game was meant to be played.

The most standard and obvious way to find the fish you want is to use Fish bait. To obtain the bait, you need to go to a beach area and look for small black spots in the sand that spray water out periodically. Take your shovel and dig in this location and you will get a Manila Clam. Gather up as many of these as you can and then take them over to a workbench. You can convert one clam into one bag of Fish bait.

Now that you have your bait, you need to go to the location of where the fish you want will appear. Make sure you've got the right period based on the hemisphere you are in and the right time of day. Now, throw the bait out into the water and a fish shadow will appear. It's important to know what kind of shadow you are looking to encounter. If it's not the right size, then throw some more bait out and try again. Anything you think is close to the size of the fish you see should be cast at. Do this until you catch the fish!

There's a couple of reasons you might head to a mystery island for rare fish. One is that you can encounter an island that will ONLY spawn large shadow fish. That means you can narrow down the fish that will spawn quite a bit. Most rare fish are on the larger side, so you can really make your odds a whole lot better if you encounter this island.

The island is pretty obvious once you get there due to you only seeing large shadows of fish. If you're lucky you will get an island that has all of the rare areas where fish spawn: River Mouth, Clifftop, and Pier. I'm not sure if you can get Pond, but it might be possible. I have seen different versions of islands that only spawn large fish, so I'm guessing this might just be a random characteristic of any mystery island.

Regardless of if the island has all large fish or not, you can take advantage of a trick that will significantly boost your chances at catching a rare fish. It appears that fish spawn on mystery islands much more frequently than on your island. Since that's the case, you can scare away fish you don't want to force other fish to spawn elsewhere! So, if you wanted a fish that only spawns at a River Mouth (Sturgeon). You would run around scaring fish around the river area and then return to the mouth of the river. Check if there's a large fish spawn here, and if so you should cast your line. If not, you can scare the fish that's there and repeat the process.

Some fish are harder to scare than others because they can spawn in an awkward spot, so use these methods to scare fish:

I used this method to catch the Sturgeon, Tuna, and the Stringfish: 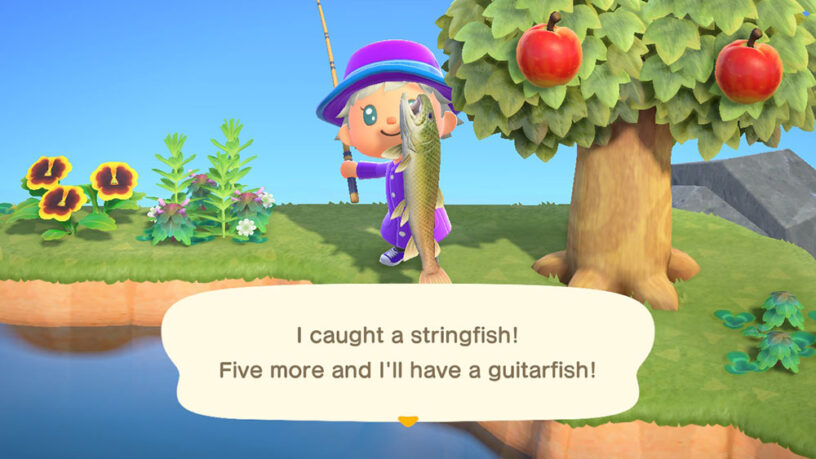 This is the option that kind of veers into exploit territory because you take advantage of the save mechanics in the game. So, do this one as you see fit!

The idea behind this method is that you can go get about 10 Fish bait and then head to the location of where the fish you want is located. Wait for your game to auto-save. You will see a circle icon with animated dots appear at the top right of your screen. Toss the bait and cast on any fish shadows that match the size you are trying to catch. Continue this until you either get the fish or run out of bait. If you run out of bait, hit the home button on your controller and exit out of Animal Crossing completely. You need to do this before it auto-saves again, you have about three minutes (if you see the auto-save indicator, DO NOT close the game or your save might be corrupted). Consider setting a timer for a couple of minutes to make sure you don't miss the window! Reload the game and you will have all of the Fish bait you started with because the game wasn't saved after you used it all! Now you can continue to repeat this process until you finally catch the rare fish.

This option really just saves you the headache of having to farm clams and craft Fish bait one by one, which can be quite a pain to do repeatedly.

The majority of rare fish share certain similarities with each other. They spawn infrequently and they sell for quite a bit of money. They also are usually fish that will only spawn in smaller specific locations. Some of the harder fish are located in areas like the River Mouth, River Clifftop, Pier, and in a Pond. Fish you might think would be rare, like the Sharks, are really not all that rare and can be caught pretty often when in season. So, here's a look at some fish that are hard to come by in Animal Crossing: New Horizons.

That's everything we know about catching rare fish in Animal Crossing: New Horizons! If you have some strategies we didn't cover in this guide, feel free to let us know in the comments.

Best Gifts for Each Villager in Animal Crossing: New Horizons