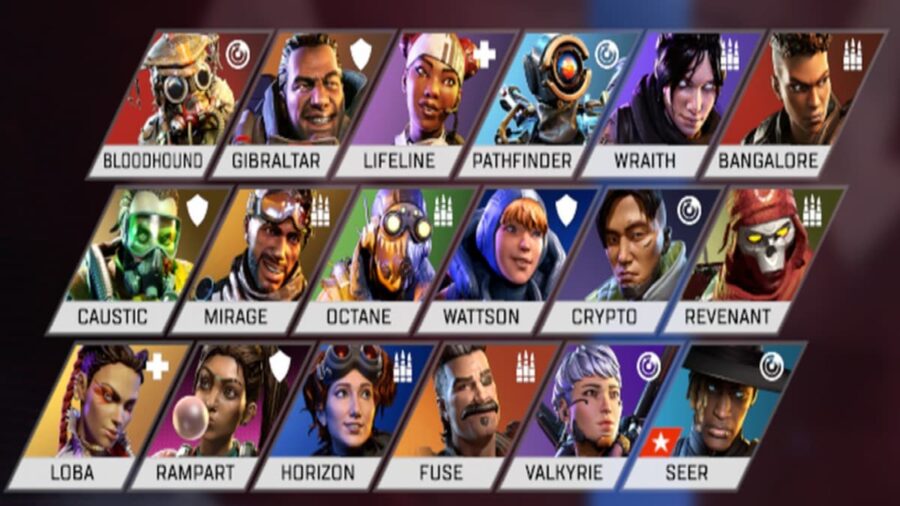 Apex Legends Season 10 added a new legend Seer as well as some changes for previous characters including Caustic, Fuse, Horizon, and Revenant. There are now a total of 18 legends in the game and all of them seem to have upside in many situations, making this list fairly balanced. Based on movement, abilities, recon, situational advantages, and character updates, here is the Season 10 tier list for Apex Legends battle royale.

Bloodhound and Seer make the S-Tier list due to their extremely powerful ability to gather information on the enemy. Both characters are able to reveal enemies with their tactical, and can track enemies before firefights with their passives. Gibraltar sits in the S-Tier section due to his uncanny abilities to absorb damage, shield allies with his dome, revive quickly within the dome, and cause damage with his ultimate.

Season 9 legend Valkyrie is an S-Tier legend because of her extremely mobile kit. Not only is Valkyrie arguably the most mobile legend, but she also causes damage with her tactical, can track enemies during dives, and can scan survey beacons. Wraith has been one of the most used legends since Apex Legends released and for good reason. Wraith's extremely useful abilities give her high mobility and positioning possibilities and now that the Low Profile perk has been removed, she is no longer a glass cannon.

Caustic is an A-Tier character now that his Gas Traps have been buffed to do increasing damage again and have a lower cooldown. Lifeline received a nerf that removed her shield while reviving allies, but she is still the primary medic and can drop a care package for usually handy loot. Octane is a speed demon who has the extremely helpful ability to passively heal, however, the only reason Octane is not considered S-Tier is because his kit is more geared towards individual play and short firefights, however, his abilities can be very helpful to the team if used correctly. Revenant and Fuse were characters that got substantial buffs, making them more versatile. Fuse's Knucklecluster lasts longer and he can track enemies inside his ring of fire. Revenant can now climb higher and still has one of the most useful ultimate for rushing opponents.

Bangalore is a solid legend that ends up in B-Tier only because there are counters for her and her ultimate is overshadowed by other characters' damage-dealing ultimates. Horizon received a change going into Season 10, increasing her Grav Lift speed, but also reduced the slow of her Ultimate, making her a pretty situational legend. Mirage has received a number of buffs in recent seasons, giving him the ability to control decoys, which can counter recon legends, but Mirage is still a situational legend too. Gone are the days when Pathfinder was the most mobile legend. After receiving the nerf to his grapple, the lovable robot hasn't been the same but still has a ton of upside.

The C-Tier characters may be at the bottom of the list, but they are still C-Tier because all their abilities have useful aspects. Crypto is great for recon, but he remains vulnerable while other recon legends are able to stay mobile. Loba's kit is impressive, but the nerf to her ultimate cooldown time makes her less useful through the match. Rampart's biggest upside is her passive ability, which boosts mag size and reload time for LMGs, but her tactical and ultimate abilities are not effective enough to compete with similar abilities. Wattson is very valuable in certain situations like late game or in closed areas, but her slow cooldowns and vulnerable ultimate put her in the C-Tier.

For more Apex Legends guides, check out Apex Legends: What is the Rampage LMG? on Pro Game Guides.