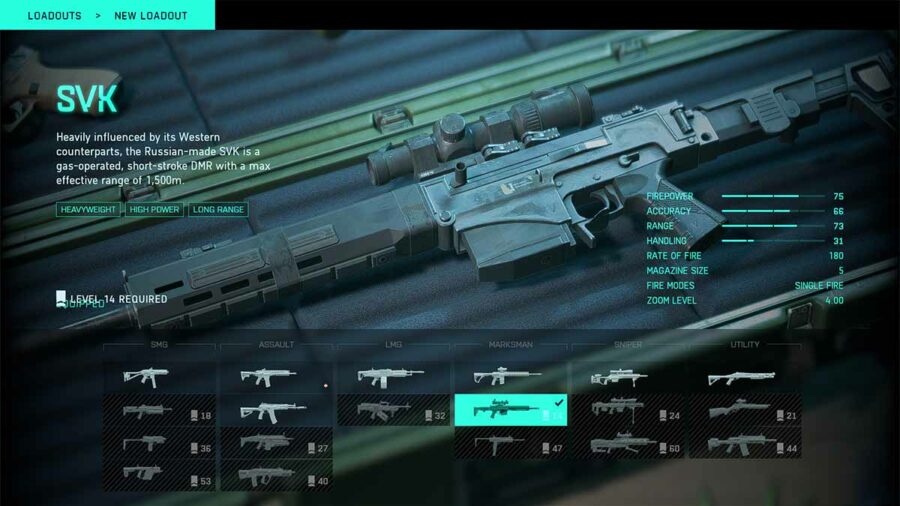 SVK is arguably the best Marksman Rifle and one of the best weapons in Battlefield 2042. Although it is meant for fights over distance, you can customize it for every situation. This guide explains how you can build the perfect SVK loadout for yourself.

The best SVK attachments for the maximum range loadout are as follows:

Apparently, the BKS 8x has the fastest aim-down-sight (ADS) speed despite its high zoom optic. Use it until it gets fixed, and then you may swap to a lower zoom sight such as Raven 4x for a comparatively fast ADS.

For the ammunition, we recommend sticking with the default High-Power magazine. The Cobra Grip stabilizes accuracy while stationary. Eventually, the Extended barrel boosts projectile velocity at the cost of a reduced fire rate. This reduces the bullet drop over range and makes the SVK a hit-scan weapon.

If you have a good trigger finger and plan to use the SVK DMR for close to mid-range, we have the ideal attachments for you below:

TV 2x or any close-range Holo sight is optimum for the desired SVK build. Although equipping the Standard Issue ammo reduces the damage range, it is acceptable considering you'll use it for medium ranges. The pros associated are massive and buff the recoil control, reload speed, magazine size, and fire rate of the weapon.

BCG Grip helps with accuracy when you shoot while strafing. Finally, you can use either of the two barrels listed above. The Suppressor provides sound suppression, whereas the Shortened Barrel boosts the fire rate.