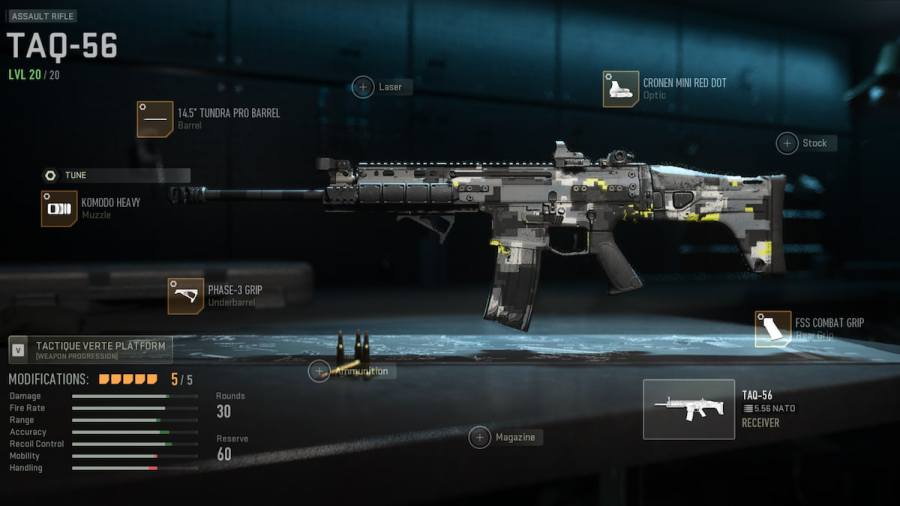 The TAQ-56 Assault Rifle in Modern Warfare 2 is one of the most used ARs in the game, and for good reason. The gun has very little sway, even without attachments, and an impressive damage range. It unlocks pretty early on and is worth putting the time in for its versatility. Run and gun players can opt to raise the ADS speed of the weapon while still having the ability to pick enemies off at a distance. These are the best MW2 TAQ-56 loadouts for every type of player.

Each person is going to have their preferred playstyle while playing MW2, but generally when playing with the TAQ-56, players should play to its strengths. The weapon on its own is very strong, capable of taking down enemies in just four shots at medium to short range. The weapon has little sway and can be modified to function a lot more like a hitscan weapon for a run and gun playstyle. This can come at the cost of the speed that players can begin to aim down the sights, but is perfect for objective based game modes. These are the best attachments for the weapon:

This build focuses entirely on making the TAQ-56 a medium ranged menace while still being able to use it at short and long ranges if necessary.

Perks are largely up to the player as they depend on whether the player will be on the move or staying put. Scavenger and Double Time are great for run and gunners, while Extra Tactical and Tracker might be better suited for some game modes like Search and Destroy. Any secondary weapon recommendations are largely the same, but there is no going wrong with the .50 GS in nearly any situation.