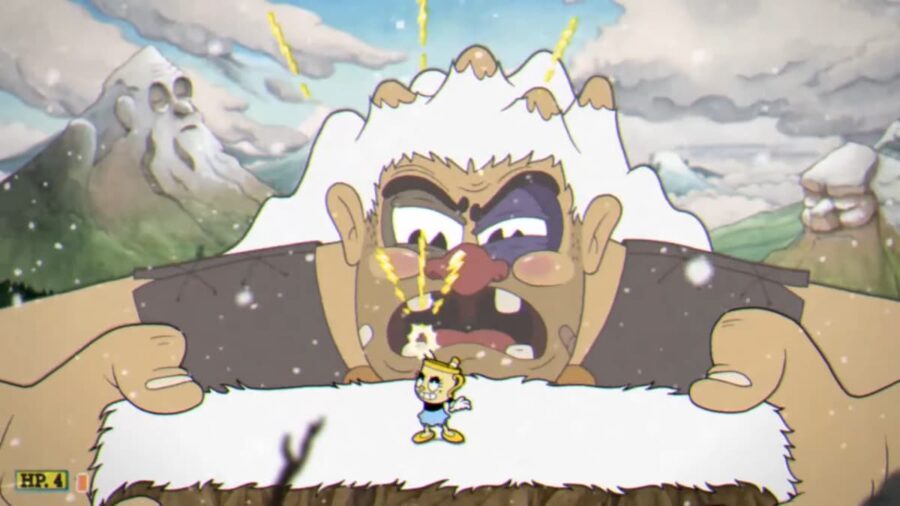 Cuphead: The Delicious Last Course, is the perfect cherry on top of an already perfect game. There are 12 entirely new bosses for players to experience. Some would argue that they are the trickiest and most enjoyable boss battles in the game. One of the bosses you will encounter is Glumstone The Giant. Here is how you can beat Glumstone in Cuphead: The Delicious Last Course.

Best Weapons and Charms to use against Glumstone The Giant

To increase your odds against Glumstone, you'll want to make sure you head into battle with the right Weapons and Charms. Pretty much the only weapon you want to be using is the Converge. It gives you a full-screen three-way shot that is essential for taking bosses down quickly. As far as Charms go, we recommend you equip the Astral Cookie. This will let you play as Ms. Chalice during the fight, gaining access to all of her abilities including the double jump, parry, and invisible dodge.

Glumstone The Giant - Phase one

When the fight first begins, you will see Glumstone appear on the right side of your screen. This phase of the fight will be pretty familiar to those who have fought other Cuphead bosses before. You will basically want to shoot the boss while he tries to take you out with various obstacles and projectiles.

As far as attacks, Glumstone will have three main attacks during this phase. The first is telegraphed by Glumstone opening his mouth really wide, revealing a cauldron and gnomes inside. These gnomes will throw damaging clouds out toward you, with the occasional pink cloud that can be parried.

The other two attacks you see are very obviously telegraphed to you by the boss. Before performing the attack, the boss will hold up a big sign that states what attack it is about to do. For one of the attacks, Glumstone will grab an angry bear and hold it in the middle of the stage. To avoid the bear, move all the way to the right and stand on the last platform. The other attack will send geese flying at you. This attack can be avoided by sticking to the ground level or a low platform.

Continuously shooting the boss and avoiding the attacks will get you through this phase in no time. The end of the phase can be recognized by Glumstone ripping his beard off and falling over.

In the second phase of this fight, the stage will flatten out and give you a lot of space to exact your thwacking against Glumstone. The boss will move over to the middle of the screen behind the platform and he will raise up two puppets on either side of the screen. You will want to focus your damage on the puppets on either side instead of trying to shoot Glumstone in the middle.

The attacks in this stage will come from the puppets located on the sides of the screen. These puppets will bounce a ball back and forth between each other. It is fairly easy to avoid if you look where it will bounce. You'll also want to keep an eye out for gnomes that pop out of the ground. They will jump up and then run from side to side. Make sure to take these guys out as soon as they pop up to avoid getting overwhelmed.

Continuously damaging the puppets will cause them to explode, signifying the end of this phase. Glumstone will then grab hold of the platform and crush it in his hands. He will swallow the debris as well as your character to begin the third and final phase.

This phase will begin when Glumstone swallows you whole. You will appear inside his stomach standing on one of five skeletons that serve as platforms in a lake of stomach acid. You'll want to make sure you stay on these five platforms as falling into the acid will take away a point of health. To deal damage, shoot the face above you as that serves as the boss's hitbox during this final phase. Be wary because it will move back and forth across the top of the stage the entire fight.

After dodging this debris, the platforms you have been standing on will open their mouths and catch the debris. They will then sink into the acid. Then after a few of them have disappeared, they will start to reappear. They will open their mouth and ring a pink bell. You need to parry this bell in order to make the skeleton close its mouth and return to the surface as a platform.

So there you have it, that is how to beat Glumstone The Giant in Cuphead: The Delicious Last Course. Out of all the bosses in the DLC, we found Glumstone to be one of the more simple ones. However, be warned, that does not mean that it is an easy boss by any means.

For more guides on Cuphead, check out How to solve the graveyard puzzle & find the broken relic in Cuphead right here on Pro Game Guides.

How to beat Glumstone The Giant in Cuphead Delicious Last Course