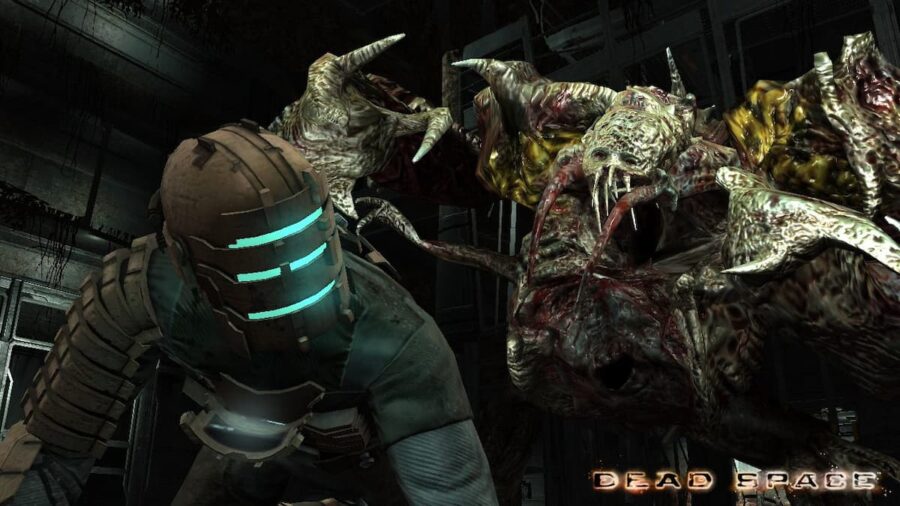 Dead Space is a science fiction survival horror title published by Electronic Arts. It follows the harrowing tale of Systems Engineer Isaac Clarke and his battle against the Markers and their horrifying Necromorphs. Aside from three main entries, the series spawned numerous spin-off games, a novel, comics, and two direct-to-video films.

What made Dead Space stand out from other survival horror titles was its strong industrial science fiction setting and how Isaac was forced to confront enemies. Up until this point, gamers were used to firing off headshots to dispatch zombies and similar monsters. Dead Space required players to dismember foes lest they regenerate and come back. It was a visceral experience where the macabre violence underscored the eeriness of the desolated locations.

It also made integrated the HUD in an incredibly unique way. Isaac's life and stasis power were tracked via gauges on his suit. The map and inventory screens were projections that were also controlled by the suit. This made for a very cinematic experience as the player never had that fourth wall broken.

Taking place in space, Dead Space also made terrific use of zero gravity situations and introduced kinesis. Kinesis allowed Isaac to manipulate objects in the game almost as if he were using the Force. This made for enjoyable puzzles and added another layer to the combat.

Related: Dead Space Remake has been officially confirmed for 2023 launch

Released in 2008 and developed by EA Redwood Shores, the original Dead Space was a breakthrough for the survival horror genre. After receiving a distress call from the USG Ishimura, on which his girlfriend is stationed, Isaac Clarke is part of the crew sent to find out what happened and provide aid.

However, upon arriving on the ship, they find most of the crew has been brutally murdered, and the Ishimura is crawling with twisted and violent monsters. Stuck on the ship, Isaac must find a way to repair the various systems, stop the Unitologist cult from spreading this plague, and escape with his life.

After destroying the Red Marker in the first title, Isaac was captured by EarthGov and sent to a space station for nefarious reasons. Now mentally unstable after surviving the USG Ishimura, Isaac is forced to build a copy of the marker by Unitologists that had infiltrated the organization.

With the marker active, the population of the space station begins turning into Necromorphs. Isaac must fight his way through a horde of enemies and deal with his own hallucinations to destroy his creation. Along the way, he encounters another survivor, Ellie Langford, and the two manage to escape.

Dead Space 2 was developed by Visceral Games, released in 2011, and featured a multiplayer mode that pit teams of players against one another. One side would take up the role of survivors that needed to complete a random objective, while the others were Necromorphs with unique abilities intent on killing all the survivors.

Related: Who is the next killer in Dead by Daylight?

Dead Space 3 was where the wheels fell off for the series and ultimately spelled its doom. Once again developed by Visceral Games, EA put pressure on the studio to chase the trend of cover-based shooters at the time. Dead Space 3 lost a lot of the horror that had made it so popular, made the game cooperative, added microtransactions, and geared it as an action-shooter.

Several years after the events of Dead Space 2, Ellie and Isaac have broken up due to his deteriorating mental condition. Unitologists have activated another marker near the colony where Isaac now lives and seek to kidnap the engineer. He is able to escape with the help of Ellie and her new beau, who leads a group of EarthGov soldiers.

From there, they head to Tau Voltanis in a search for the Markers' origins. Joined by John Carver, Isaac and the crew uncovers that there are several moons in the system, which are actually the final form of life for the Necromorphs. Unfortunately, the moons have been awoken and begin making their way to Earth. In a desperate attempt to stop them, Isaac and Carver are intercepted by a moon, leaving their fate unknown.

Rather than continue a story with a decade-long gap, EA has decided to bring Motive Studios on board to remake the original title. Set to release on January 27, 2023, the remake utilizes the Frostbite Engine to give a complete visual overhaul to the USG Ishimura. From what little has been shown of the title thus far, it looks terrifying. While it's disappointing we likely won't ever see a conclusion to the original story, it's nice to see Dead Space finally make a return.

For more survival horror goodies, check out Resident Evil 4 gets free VR update for The Mercenaries on Pro Game Guides.

What is Dead Space about? Gameplay, Story, Remake, & more!