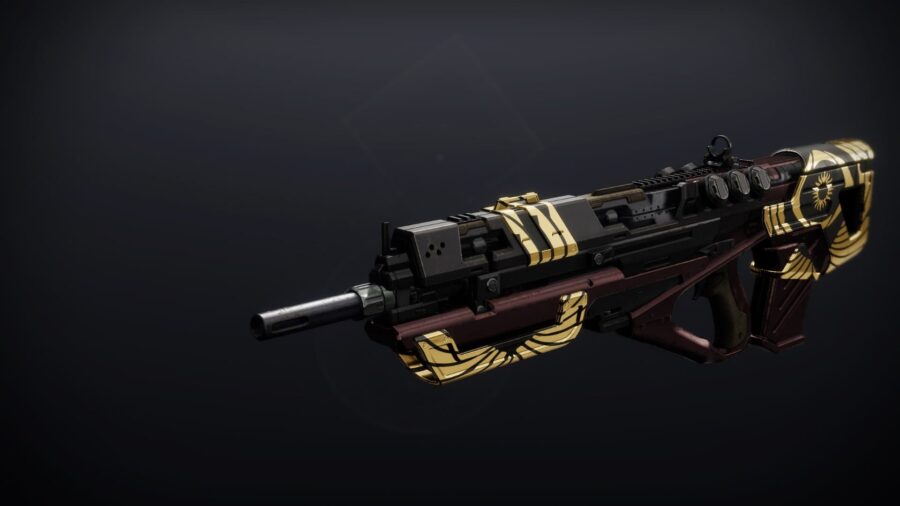 Pulse Rifles are some of the best weapons available in Destiny 2 due to their advantages across PVP and PVE. They are burst-fire weapons that allow for aggressive, support, or long-ranged play, and each weapon in the pulse rifle class is varied enough to be unique to its own perks and skillset. Although some pulse rifles on this list are definitely better than others, many of these weapons fall down to individual preference and playstyle too. These are some of the best pulse rifles in Destiny 2.

This exotic pulse rifle returned in Destiny 2 with a new exotic perk: String of Curses. Which, after kills, refills the magazine, increases damage, and grants Super energy. With these benefits alone, the Bad Juju pulse rifle is great for clearing ads, but even better in team-based PVE like Gambit. Having at least one member use Bad Juju and have a constant supply of Supers will help progress through each phase faster, ensuring a faster path to victory.

How to Get: Exotic Kiosk

Cold Denial has a ton of perks in its pool, though we recommend a God Roll that includes Killing Wind and Swashbuckler for the range, damage, and mobility benefits. In addition to having one of the fastest times to kill (TTK) of all the pulse rifles, Cold Denial's cosmetic design doesn't distract or interrupt your gunplay. Aiming your crosshair is as direct as it gets, and you won't have to worry about the gun preventing you from landing a shot.

This pulse rifle doesn't benefit offensive players, but the Jian 7 Rifle is great for support players. The TTK on the Jian 7 isn't built for aggression, so it shouldn't be relied on for that type of gunplay. But if you roll a Jian 7 with Disruption Break and, hopefully, Rampage, then you're the teammate who can chip away at enemy shields from a farther distance. Trust us, your team most likely needs a support!

Best for: PVE and PVP (Support)

No Time to Explain

If you're nice with your precision shots, expect to spend more time shooting and less time reloading with No Time to Explain. This exotic pulse rifle's perk is Rewind Again, which returns shots fired to the magazine if they are precision or shots against enemies that were either slowed or frozen by Stasis. With stellar base stats, especially in terms of range, this is one of the best pulse rifles to use in all of Destiny 2, bar none.

Best for: PVP and PVE

How to Get: Beyond Light campaign, Exo Stranger

Often hailed as the best pulse rifle in Destiny 2 is The Messenger. Although this gun has returned from Destiny, the perk pool on The Messenger is even better in Destiny 2.The ultimate God Roll for this weapon is Rapid Hit (increases stability and reload speed after rapid precision shots) paired with Desperado (increases rate of fire when reloading after a precision shot). Your greatest success depends on your ability to land precision shots, but the TTK on body shots is still better than most weapons in the game.

How to Get: Trials of Osiris

The Sacred Provenance's main advantage is Aggressive Burst, aka 4-burst fire. As a result, this is one of the best pulse rifles for aggressive players due to the rapid fire rate advantage. The perks Rapid Hit (reload speed and stability improved after rapid precision hits) and Kill Clip (damage increases when reloading after a kill) benefit both PVE and PVP. Although you still must aim shots carefully, the 4-burst fire allows for more forgiveness.

How to Get: Garden of Salvation Raid

One look at the massive perk pool from the Stars in Shadow should make clear just how much this pulse rifle can do. The weapon's High-Impact frame slows your mobility but greatly increases damage while stationary and aiming down sights. For PVE we recommend Outlaw (reload time improves with precision kills) paired with Kill Clip (damage increases when reloading after a kill). For PVP we suggest Killing Wind (increased mobility, range, and handling after final blows) with Kill Clip. It's also the only worthwhile Solar pulse rifle in Destiny 2, which is reason enough to grind for this weapon.

Best for: Both (slight PVP advantage)

How to Get: Crucible

The Adaptive Frame archetype makes The Third Axiom a sturdy and reliable pulse rifle. For both PVP and PVE we recommend rolling Feeding Frenzy (reload speed increases stacks with rapid kills) and Rampage (damage increase stacks with kills) for an even more stat boosts after earning kills. With great stability and handling as The Third Axiom's main selling point, this pulse rifle just feels great to use.

Best for: PVP and PVE

How to Get: Strikes

The Time-Worn Spire benefits from the Rapid-Fire Frame archetype, resulting a pusle rifle with one of the largest magazine clips at 37 rounds. This isn't the "be-all-end-all" pulse rifle, but with potential rolls of Feeding Frenzy/Subsistence and Rampage/One for All, you can't go wrong using this weapon. In this instance, the Time-Worn Spire also benefits from a smaller perk pool since the perks available are all pretty great.

How to Get: Iron Banner

What's that? You were impressed by the Sacred Provenance's 4-round burst? How about the Vigilance Wing's 5-round burst. Yes, this pulse rifle beats out the Sacred Provenance with the extra bullet, but Vigilance Wing is a PVP monster for even more reasons. In addition to the 5-round burst, the Harsh Truths exotic perk also heals you and grants movement speed if a nearby ally was killed. Vigilance Wing also benefits from Last Stand, which improves movement speed and recovery if you are the last player alive on the team. Taking this weapon into Crucible provides you with an advantage across nearly every game mode.

How to Get: World Exotic Drop, or Xur

For more Destiny 2 guides, check out Destiny 2 Weekly Reset Time, Legacy Activities, Nightfall, & More and Destiny 2: Where is Xur and What is he Selling? on Pro Game Guides.