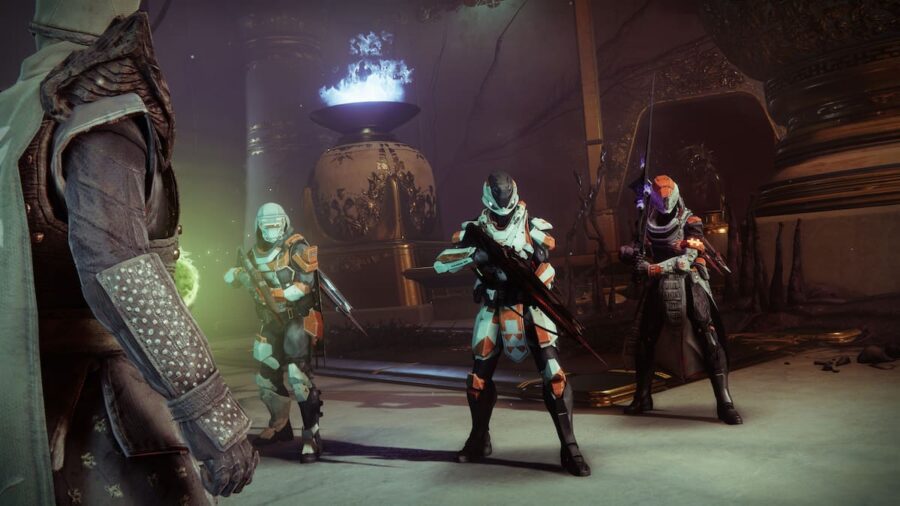 Duality is the fifth dungeon to come to Destiny 2. In Duality, Guardians are forced to dive into the mind of the exiled Emperor Calus to uncover his connections with the Darkness and the Witness. But this isn't a trip for the faint of heart. Calus' mind is fraught with terrors beyond imagining. Getting to the Duality Dungeon is a little counter-intuitive. To start the process, Guardians must speak with Hawthorne at her perch in the Tower. With the mission acquired, Guardians can head to the new waypoint on the Moon.

The biggest thing to know about Duality is that it is a target-rich environment. Enemies will constantly swarm in each encounter, and it gets worse in the final fight. As such, having weapons capable of quickly clearing mobs is crucial. We recommend:

For armor and subclasses, you'll want whatever grants you the most survivability. This can be a little different for each player. But with the release of Solar 3.0, Titans and Warlocks stand out most. Well of Radiance is a must if running with a Warlock. For Hunters, we recommend Void for tether and invisibility.

The biggest mechanic in Duality is the bells. Doing damage to a bell will change the world between two different dimensions. The first is the Material World and the second is a red and black-tinged Nightmare Realm. Swapping between worlds is critical to navigating the maze of the dungeon and integral to each encounter.

Note with the bells that, when in the Material World, one can damage the bell from anywhere and be transported to the Nightmare Realm. However, when in Nightmare Realm, one must be next to the bell when damaging it. Anyone not near it when the transition occurs will be instantly killed. Also note that any damage can trigger the transition, so be mindful of effects like explosions, damage over time effects, or AoE attacks. Should your team be in the Nightmare Realm and away from the bell when something damages it, that's an instant wipe.

Enter the Mind of Calus

Upon entering the dungeon, you'll run into Eris next to a statue of Calus. Walk toward the statue and fall down the hole. This will place you in a small hallway with no clear exit. Look through the bars opposite where you entered and you'll spot a bell. Shoot it to transition to the Nightmare Realm. Climb the various platforms and ledges to make your way to the top of the room. Along the way, with each swap of the bell, more enemies like Psions and Cabal will appear.

Eventually, this will lead through a series of jumps and bells. This is all practice to get you used to using the bells and how they can impact the environment. Ultimately it leads to a room with a large canopy. After clearing the enemies a hole will open in the floor. Drop down for the first boss encounter.

This fight will take what was learned about bells and swapping realities and put it to practical use. The concept is simple, but the execution will take some practice. The good news is that this fight sets the tone for the remaining encounters in Duality. There are four symbols to pay attention to: Chalice, Sun, Axes, and Dogs. The fireteam will be acquiring the Essence from the Nightmare Realm and planting it in the corresponding location in the Material Realm.

One important thing to note is that when you're in the Nightmare Realm, there will be a timer that is ticking down. If your fireteam is still in the Nightmare Realm when the counter reaches zero, it will be a party wipe. To make the Conquest Bell appear, it is critical to take down the Bellkeepers. It helps to have one member of the fireteam assigned to take them down.

After collecting the loot from Gahlran, your fireteam will descend deeper into Calus' mind palace. The main room is a large platforming arena. Head down to where the first batch of Cabal are, then proceed to a pillar across from there to find a switch. Activate the switch and a set of platforms will appear on the wall next to you.

Make your way up the wall and to the other end of the room. There will be another switch here. After activating it, turn around and head up the next set of platforms. When going down the shute, be careful, as exiting at full speed is a death sentence.

In this room, there are four statues of Gahlran surrounding a bell in the center. Make a note of which way the statues are facing in the Material World. When you hit the bell and go to the Nightmare realm, all of the statues will be facing the bell. The objective is to have all the statues in the Material World face the bell. In the Nightmare Realm, there will be a switch that will rotate each statue 90 degrees counterclockwise. Feel free to swap realms to check the status of each statue.

The second fight requires the fireteam to open the vault. To do so, they must defeat three Nightmares by depositing six Standard Essences. For every pair of Essences that are deposited, a Nightmare will become vulnerable and the fight enters a DPS phase.

Much like the first fight against Gahlran, there are symbols to be mindful of. To make this encounter easier, it is best to break the fireteam into two, with two members hunting down the symbols and the third member taking down the Bellkeepers. The reason for this is that the time in the Nightmare Realm is very short. This will help ensure time doesn't run out.

In the Material World, there will be two symbols that appear near the center of the arena. These are the symbols that need to be acquired in the Nightmare Realm. Shoot the bell to head to the Nightmare Realm. The lone Guardian will immediately proceed to take out the two Bellkeepers that spawn, clear any additional enemies in the room, and essentially keep the bell area clear. The team of Guardians will proceed to the corners where the appropriate Standard Bearer is. Clear the room to claim their Standard Essence and immediately hoof it back to the central room and hit the bell.

We cannot stress enough just how critical it is to be speedy here. As Power Levels go up and Guardians become more confident, splitting the team of two Guardians so they can each collect an Essence will be doable. But for the first few runs, it's best to stick together.

Heading deeper into the vault will lead the fireteam into a large room with an imposing cube covered with a cloth. Look toward the back left for a bell and shoot through the bars to activate it. Much like the beginning of the dungeon, the objective is to head to each bell, swap realities, and head forward.

The fight against Caiatl is straightforward but intense. There is a never-ending horde of enemies that must be contended with in both the Material World and Nightmare Realm. So, having ad clear is absolutely critical. Make note of the symbols above each alcove and their position on the floor. Defeat the Standard Bearers at their respective position in the Nightmare Realm to be able to plant their Essence in the Material World. This will take a couple of transitions between planes to gather all four. Once all four Essences have been planted, shoot one of the purple locks on the chain to have the bell ring out.

As Caiatl enters her DPS phase, the fireteam will be teleported to the Nightmare Realm. Here, she will move randomly to each of the three bells. Shoot the bell to stun Caiatl, gain a buff, and make her vulnerable. Be mindful of positioning, as her stomp can knock Guardians off the edge of the platform. Rinse and repeat this process until she's down.

When entering the circular room with the Gahlran statues, look up. One of the balconies will have its doors slightly open. Jump on the shoulders of the nearest statue to reach it.

Immediately after defeating the Champions in the second encounter, you'll be in a room with a giant cube covered in a white tarp. Crouch under it, and upon looking back at the entrance, there will be a chest.

Destiny 2 Duality Dungeon Walkthrough – How to complete each encounter