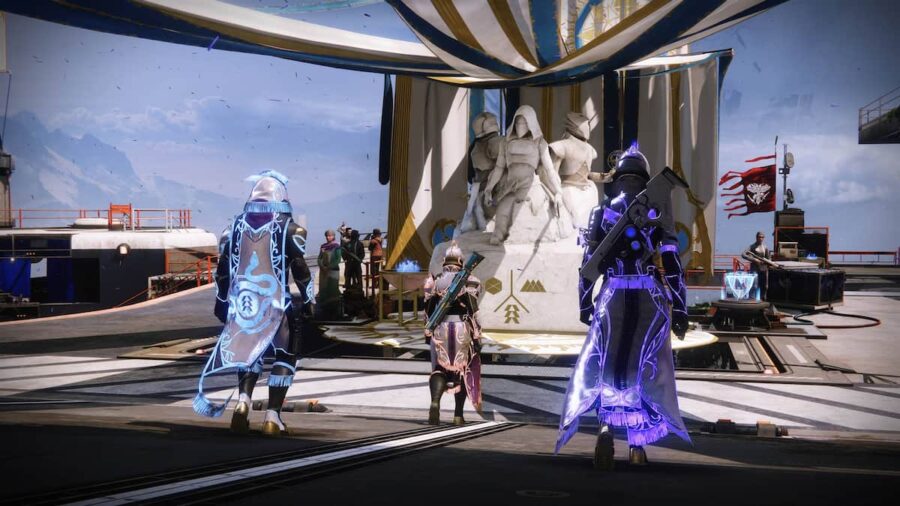 The Solstice of Heroes summer event returns to Destiny 2 in 2021 and Eva Levante awaits all participating Guardians in the Tower. Check out the details below for a complete overview of this limited-time event.

The European Aerial Zone (EAZ) is the main activity of Solstice of Heroes and can be activated from the Tower. It is a matchmaking event where a fireteam drops into the EAZ and must defeat as many powerful bosses as possible before the timer reaches zero. When timer ends, a more powerful boss will spawn that must be defeated.

Eliminating this boss will spawn multiple chests that must be opened before the next timer runs out. They are scattered throughout the map and hold these rewards: Solstice Packages and Solstice Key Fragments.

Related: How to open Solstice Packages in Destiny 2

Upon starting Solstice of Heroes, Eva Levante will give you one armor piece starting at the lowest rarity. Your goal is to gain an entire armor set and improve each individual armor piece's quality. To improve its quality, you must completing specific objectives (tied to the armor piece) in the EAZ. The armor piece must be equipped while in the EAZ for the objectives to count as completed.

The tiers of armor are as follows:

Armor Accelerants increase the progress of armor objectives, allowing you to complete sets faster across multiple classes. Essentially, this is really useful for Destiny 2 players that have more than one character.

For example, if you are playing on a Titan and upgrade your armor set to a new tier, you can pick up Armor Accelerants and use them on your Hunter or Warlock. Acquiring these will help you upgrade sets faster for your secondary characters.

After completing the EAZ for the first time, players can redeem bounties from Eva Lavonte that reward players with XP, Bright Dust, Key Fragments, and Glimmer. These bounties are:

Players should frequently pick these bounties before starting the EAZ activity for the most possible rewards.

Related: Destiny 2: How to complete the Cadre of Contenders seasonal challenge

The Compass Rose Shotgun is a new legendary weapon that features in Solstice of Heroes 2021. For a chance at getting this shotgun, players must open Solstice Packages throughout the event. This weapon will, presumably, not be available after Solstice of Heroes has concluded.

Solstice of Heroes 2021 remains active from July 6 to Aug. 3. Players must upgrade their armor sets across three tiers as much as possible before the end date. However, if players are working on completing the Magnificent Solstice (Tier III) set objectives, Bungie is allowing them to continue the objectives after the event has concluded.