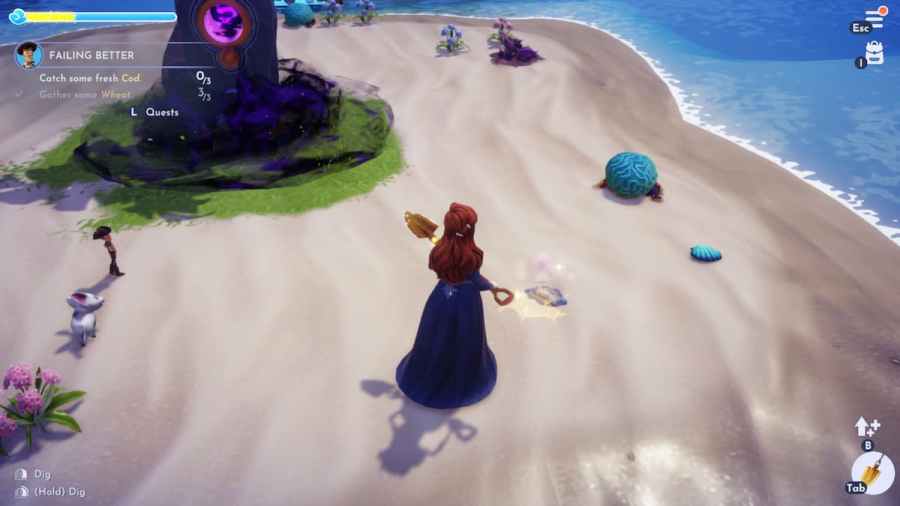 The lights are lit, shops are running, and your favorite Disney villagers have returned to the town with a smile on their faces and a welcoming hug to greet you—but something isn't quite right. It might be the ever-growing Night Thorns or the shadowy figure of someone evil and malicious slipping through portals in the shadows, but the more you play Dreamlight Valley, the more it begins to feel like there's a horrible surprise lurking behind some unsuspecting quest. Here's why Disney Dreamlight Valley is the psychological horror game you didn't know you needed.

The game opens with a town in shambles, overgrown with Night Thorns and ripped apart by something called The Forgetting. Before you can even get settled with anything else, you have to help rescue Mickey, who is literally imprisoned in his home, confused, and forcibly separated from Minnie, who wanders in the shadowland. This isn't the only romantic sacrifice in the game, however, as later on, Kristoff needs to sacrifice all of his memories and love for Anna to help restore the valley. It's unclear if those original memories ever truly return.

As the game continues, you travel between realms as some characters return to their home portals or little realms outside of Dreamlight Valley, where they relive moments from their source material. While these little vignettes are supposed to be a fun nod to the stories that the characters came from, they operate as tiny prisons as the characters have forgotten Dreamlight Valley and have no escape from the room or island where they must survive all alone.

The tension continues to build in day-to-day gameplay. The music for the game is light, cheery, and creates a happy atmosphere for you to wander around and complete quests for characters like Mickey. These optimistic tunes, however, have a different energy when you are trying to solve the forgetting and turn a corner to find Mickey's unblinking, smiling face inches from your own. It's almost as if the characters are trying to trap you in Dreamlight Valley and prevent you from returning to the land of the waking so that they may never again encounter the Forgetting. Maybe this isn't so much a game about banishing the darkness but escaping from a facade of careless joy and laughter.